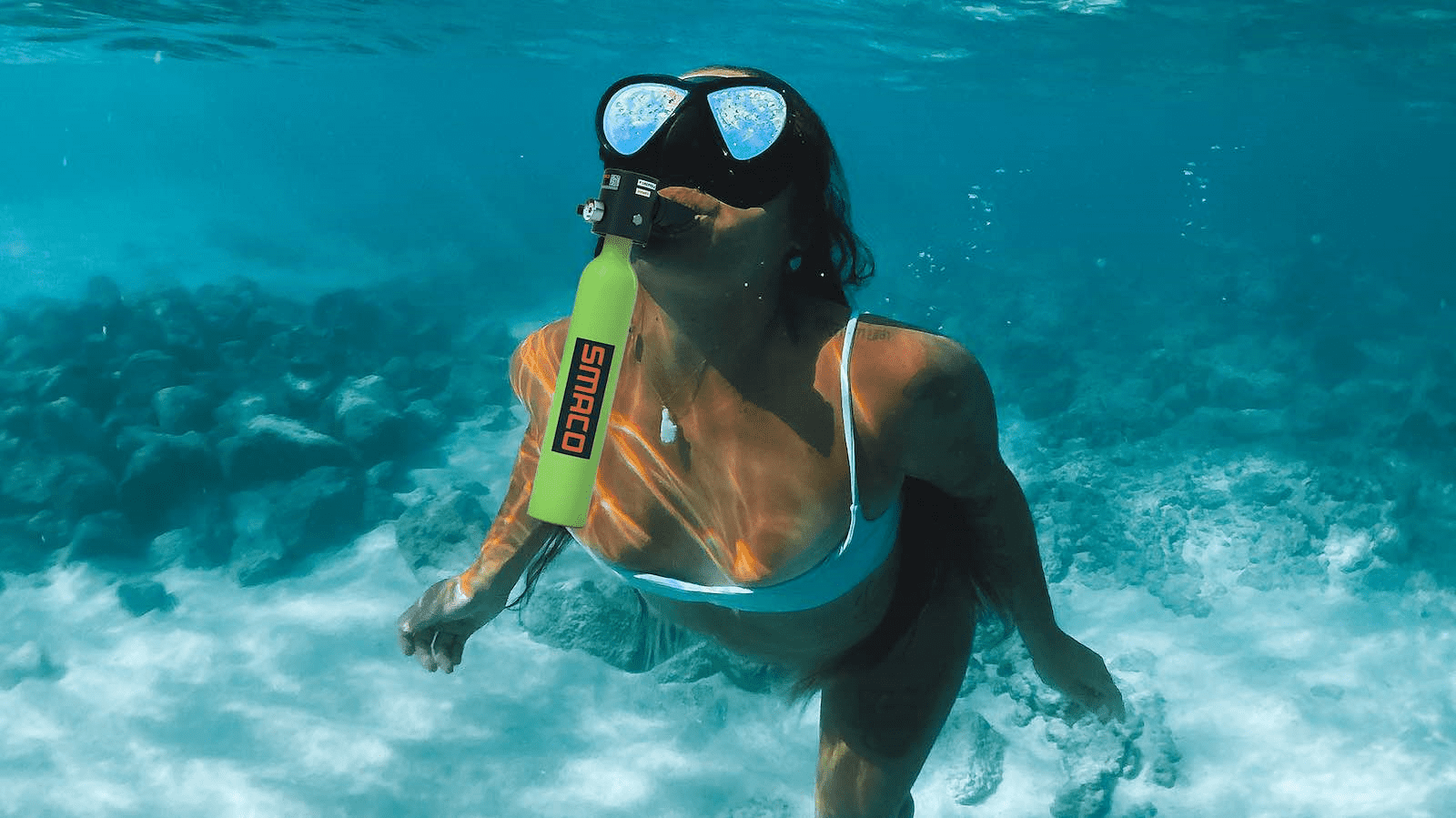 Many people love scuba diving but dread wearing heavy diving gear. As a result, some equipment makers started producing mini scuba tanks. However, these small scuba tanks are hotly debated among divers, with some even calling them suicide devices. So, are mini scuba tanks safe?

In general, mini scuba tanks are not safe due to many reasons. The small tanks may not deliver enough air and do not have a secure method to prevent the mouthpiece from falling out of your mouth. The air quality is also an issue since you only use a hand pump to fill it. In addition, these mini scuba tanks do not have third-party certifications.

How Different Are Regular and Mini Scuba Tanks?

Regular and mini scuba tanks differ in size, price, working pressure, use intention, diving time, and depth. You may also need to be more careful when using mini-scuba tanks.

Mini and regular scuba tanks may look and perform a similar function. Still, they differ from each other in so many ways:

Mini scuba tanks operate at a smaller pressure. Snorkel, for example, has a working pressure of around 2900psi (200 bar.)

Regular scuba tanks are designed for scuba diving. Most standard scuba tanks come with systems to help air control and may also include more safety controls.

Mini scuba tanks were originally made as a reserve source of air in case your primary supply failed. The most famous is the Spare Air backup system. However, mini scuba tanks have recently seen increasing use with recreational divers, who use these mini tanks to do shallow diving.

For mini scuba tanks, you may only use them to breathe underwater for around 5 to 15 minutes. The final figure may be determined by many other factors, such as lung capacity and physical exertion.

Regular scuba tanks allow you to dive deeper. This is because regular tanks simply hold more air. This allows you more time to swim deeper into the depth of the sea. On top of that, the deeper you are in the sea, the more air you will consume to breathe. This means a larger tank will allow you more air reserves.

Mini scuba tanks do not provide much diving depth capacity because they do not hold much air. You may not want to dive deeper than 30 ft with one of these, because you will run out of air much faster.

Generally, mini scuba tanks are not safe for diving. This is because they do not indicate ascent pace, exposing divers to dangers such as burst lungs or ears. It also may not have good air quality. Some mini scuba tanks are very insecure, with no attachment to avoid drops. The only exception is the use of mini tanks as backup air supplies.

There were loud reactions from diving communities worldwide when mini scuba tanks become popular. Many dive professionals are unsure about their safety and are concerned about how many people use them without adequate dive training.

1 – Encourages Many to Dive Untrained

There is a reason why divers become certified. Diving, even at a shallow depth, can be dangerous if safety protocols are not followed. Minor mistakes can cause massive injuries such as pulmonary barotrauma (burst lung) or ear barotrauma (burst ear.)

Mini scuba tanks somehow encourage many to attempt diving without being certified first. This means they are diving without the basic knowledge and safety measures to protect themselves.

2 – May Not Have Depth Indication

One of the biggest dangers divers face while diving is pulmonary barotrauma (burst lung) or ear barotrauma (burst ear). These conditions usually happen when divers ascend too quickly, resulting in the air pressure inside their lungs and ears being much greater than the surroundings, causing injury.

Common advice for divers when ascending is to not rise faster than 1 foot per second. Some experts recommend limiting the rate to ½ foot per second. Anything faster, and they may risk injury.

Some mini scuba tanks, such as Snorkel, are designed to connect to a mouthpiece, which then goes into the diver’s mouth. There are no other straps to secure the tank to the body. When diving, the tank is only kept in place by the mouthpiece. This means the tanks can easily drop from the diver’s mouth.

Most regular scuba tanks are refilled at a professional diving station. At these stations, safety standards are high, and the air quality is highly regulated. This means you are breathing clean, high-quality air when you dive with a regular scuba tank.

Many mini scuba tanks come with manual air pumps that you operate with your hands or feet. This means you are simply randomly pumping in the air from the outside without knowing the air’s cleanliness and quality. Breathing dirty air in concentrated form can be dangerous to health.