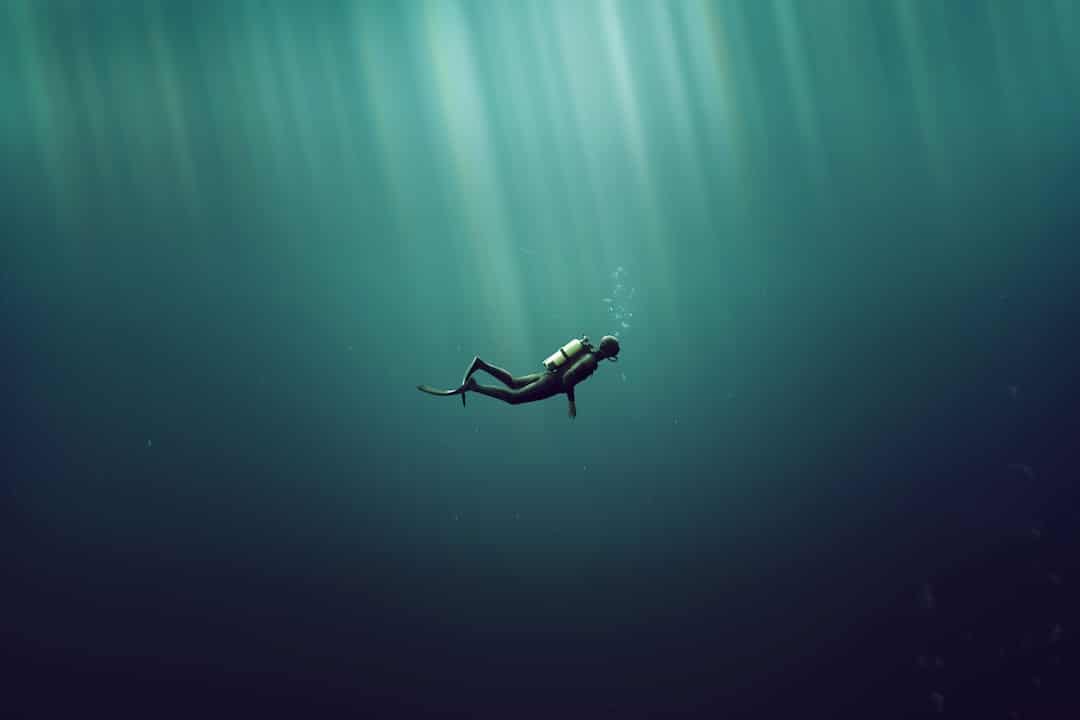 Less than ten people are known to have dived below 240 meters, or 800 feet, using a self-contained breathing apparatus on a recreational dive. More people have set foot on the moon than have reached the deepest scuba dive.

Deep diving brings a mix of fear and fascination to anyone. How much do you know about the deepest scuba dive in the world?

Diving to a depth of 300 meters, or 1,000 feet, is the “holy grail” of deep scuba diving. In 2001, a diver named John Bennett first achieved this depth, and the same depth has been reached just a handful of times since. It’s highly dangerous, yet it comes with the thrill of doing something few people have achieved so far. What’s the deepest scuba dive, and what makes deep diving possible? Let’s take a closer look at the mysterious world of deep diving.

What is Deep Diving?

Deep diving generally refers to recreational dives that go below the accepted safe depths agreed on by the diving community.

When people scuba dive recreationally, they use a breathing apparatus to breathe compressed air while underwater. Because of the limitations of our bodies, and the equipment used in diving, you can only dive to a certain depth for a certain amount of time. The deeper you go, the shorter your dive has to be for safety. After that, you’re in danger.

When people ask “How deep can you scuba dive?” there is no short answer. There are many variables that affect the depths a person can reach. However, some people test these limitations by heading out on dangerous, thrilling deep dives.

If these are the safest depths, how do divers plummet to 800 feet or more? Let’s take a look at some of the risks posed by deep water.

The Dangers of Deep Diving

Just because you can dive deep doesn’t mean you should. Experienced divers know that deep dives come with some heavy risks attached.

Dives between 30 and 60 meters can still be within the safety recommendations for experienced divers. However, at those depths, divers can get nitrogen narcosis. This state of altered consciousness happens when nitrogen gas is inhaled under high pressure.

Some people call nitrogen narcosis the Raptures of the Deep. Nitrogen is always present in the air we breathe, and it usually passes through our bodies without issue. But when divers are deep underwater, they breathe in more nitrogen than usual, because the air they breathe is condensed by the pressure of the water.

This nitrogen excess saturates the nervous system in an intoxicating way. The deeper the dive, the more severe the effects. Nitrogen narcosis begins with a sense of euphoria, lightheadedness, or numbness. As it intensifies, divers lose some of their manual dexterity, as well as the ability to make rational decisions. Anxiety, fear, or panic may set in. If it becomes too severe, nitrogen narcosis can lead to unconsciousness or death.

However, until the narcosis becomes intense, the diver might not even realize they’ve been affected. This can lead to poor choices like rising too fast or not paying adequate attention to the air supply.

At significant depths, the oxygen also can become toxic, because it’s so compressed. Breathing heavily compressed air for too long can be fatal even without nitrogen narcosis.

If a diver is able to gradually release the water pressure, letting the built-up gases in the bloodstream leave naturally, they’ll reduce the likelihood of decompression sickness, or the bends. Decompression sickness happens when these gas bubbles grow and can’t escape.

The gas can form in or travel to any body part, so decompression sickness manifests in a number of different ways. However, at worst, it results in paralysis or death.

Underwater, the only air supply is the one you take with you. One major danger of a deep dive is simply the loss of air.

During a deep dive, the high pressure means the air runs out faster. Divers need to carry extra air and carefully watch the supply so they can surface before it runs out.

How are deep dives possible with all these dangers at play? Let’s take a look at how deep divers avoid the hazards of the depths to achieve a feat as rare as walking on the moon.

How to Achieve the Deepest Dives

Sometimes, you may hear people refer to deep diving as “technical diving.” Technical diving encompasses any diving method divers use to go beyond the depth and time limits of recreational diving.

Technical divers often dive using special gas mixtures, rather than air, that are better for breathing at great depths. They also wear special apparatus to help them carry what they need with them. They can adjust the gas mixture depending on the how deep they plan to dive or the amount of time the dive will take.

Technical divers spend more time in deep ranges than other divers, working in depths of 170 to 350 feet, on average. During a technical dive, divers have to take more decompression stops as they rise. They might switch to a different gas mixture on each of these stops.

Nitrox is one of the gas mixtures that makes deep dives possible.

Most divers generally use compressed air for scuba diving — it’s inexpensive and easy to get. However, compressed air increases the likelihood of nitrogen narcosis on a deep dive. Instead, deep divers often use nitrox.

Nitrox contains far more oxygen than air does, although you can change the exact oxygen-to-nitrogen ratio as necessary. This helps divers avoid narcosis, but it does increase the risk of oxygen toxicity. Oxygen toxicity can lead to seizures and drowning.

To avoid this risk, divers have to pay careful attention to the amount of time they spend breathing nitrox.

Deep divers may also use other mixes to breathe, besides air or nitrox. This is mixed-gas diving.

Divers must plan well for mixed-gas diving so that they choose the right mixture. People do mixed-gas diving to avoid narcosis, oxygen toxicity, and decompression sickness. However, it takes special equipment, and sometimes even special facilities, to produce these breathing mixtures.

Extremely deep dives sometimes use a mix called heliox. Heliox is mostly helium, as well as oxygen. Since helium can’t intoxicate people and is less dense than nitrogen, it’s easier and safer to breathe at great depths. It can also help with decompression.

No matter how you approach it, deep diving always comes with danger. Now, let’s take a look at how the record-shattering deepest scuba dive was achieved.

At 41 years old, he set the Guinness World Record for the deepest scuba dive by reaching a depth of over 1,000 feet, or 305 meters, in 2014. Gabr tested the limits of his capabilities in the Red Sea. He told the media that he hoped to show that humans were capable of surviving such incredible depths.

Gabr was able to reach this record-breaking depth in just 12 minutes. He used a tagged rope to help him along the way. However, the trip up wasn’t so fast – Gabr had to take 15 hours to resurface to avoid negative effects from the dive.

Thanks to his caution, he surfaced without any decompression sickness or other negative effects. But the feat was difficult to accomplish. He spent four years training to break the record for the deepest scuba dive, after having worked as an Egyptian Army special forces officer, then as a diving instructor for 17 years.

The deepest scuba dive in the world is a record that few people in the history of diving have come close to. Although Gabr stated that his desire was to prove that humans can survive at extreme depths, it’s not a place we can survive in often, or for long.

Other divers have met more tragic ends while trying to break depth records. Different types of extreme diving record-breaking, such as the longest dive, come with their own dangers. But there’s no denying that the pressure, darkness, coldness, and limited air supply in deep water poses one of the greatest threats to survival during any water-related recreational activity.

Deep dives aren’t a good idea for people who don’t have extensive scuba experience and training. However, even beginning recreational dives will help you appreciate the extremes that deep divers go to. Would you ever consider trying a deep dive? Leave a comment and let us know!

Gear You May Want To Consider