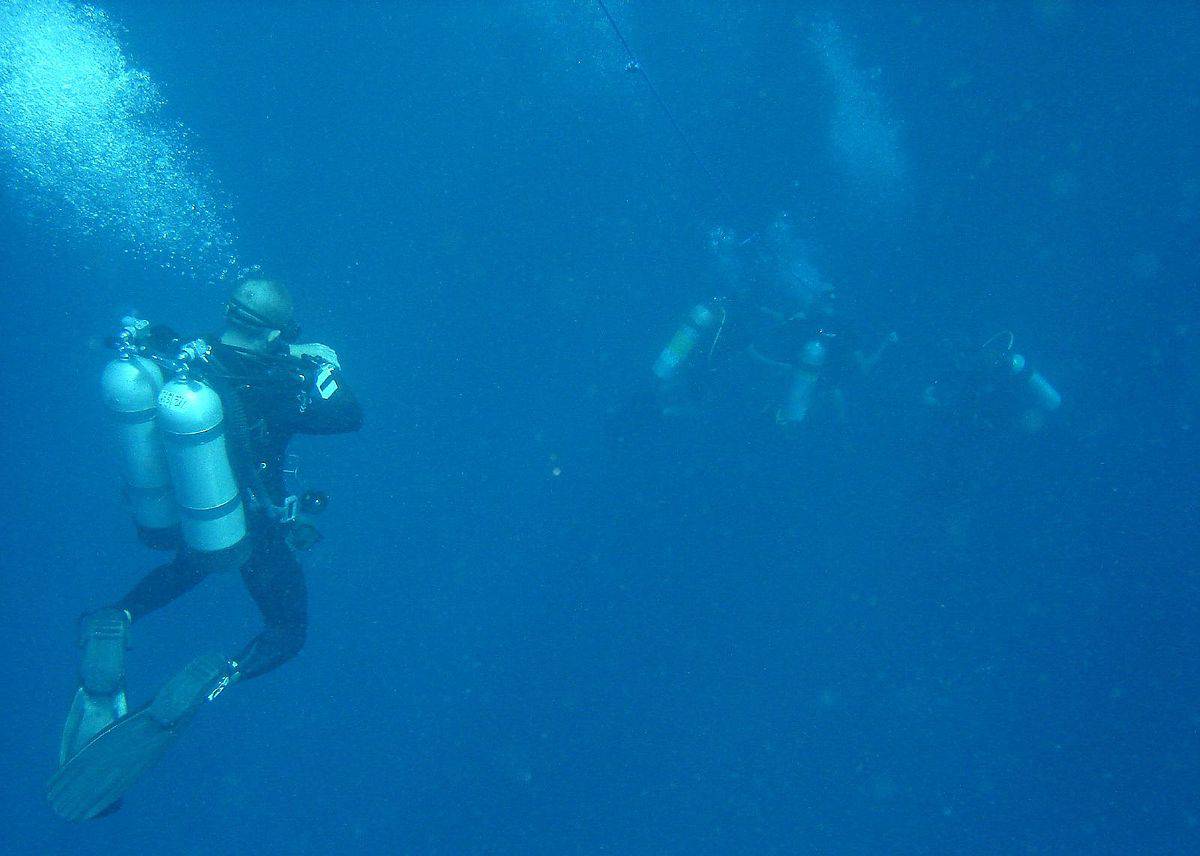 Those new to deep sea diving often get hung up about decompression and the limitations it places on their dive. In short, there is no one-size-fits-all answer. Instead, there are wide differences in the depth levels that each diver can reach before dealing with decompression.

In this article, our experts break down everything there is to know about decompression while diving. This way, you can find out the answer to that age-old question: “How deep can you dive without decompression stops?”

In scuba diving circles, we hear the expression “getting bent” all the time. But what is “the bends” and why do we always have to worry about it? Or, do we even have to worry about it at all? The answer is yes, you most certainly do need to remember to protect yourself against the bends every time you dive.

Essentially, the nitrogen found in a diver’s air tank will gradually pressurize as the diver swims deeper underwater. As a rule, every 33 feet that a diver descends will cause 11.6 pounds of pressure per square inch. With more and more pressure accumulating, more nitrogen is absorbed into the body via its various tissues. Eventually, this causes intoxication similar to drinking alcohol.

How deep can a scuba diver go before they have to worry about decompressing? Well, it is hard to say. A lot will depend on the size and personal characteristics of the diver in question. However, nearly all deep-sea diving enthusiasts will hit that threshold within a few minutes if they are diving too, say, a depth of 100 meters below.

Ultimately, the answer to the question “how deep can you dive without decompression” will depend on a multitude of factors. Regardless, every dive below 30 feet is at risk of decompression illness and thus is must always be taken seriously.

How deep can you scuba dive without decompression? The answer to this question can be found by referring to some of the deepest dives on record. In many instances, deep sea divers have reached historic depths without having to fully attend to decompression stops.

For instance, the deepest scuba dive ever recorded took place in September 2014 by a 41-year-old Egyptian named Ahmed Gabr. On that day, Gabr reached a depth of 1,090 feet which is nearly 1,000 feet below the depth limit that most diving instructors set for their pupils. While Gabr’s descent only took about 12 minutes, it took a whopping 14 hours to make his way back up.

Clearly, critical depths such as those reached by Ahmed Gabr require incredible patience and constant stops for decompression. It should be noted that Gabr was equipped with nine oxygen tanks and a long list of devices that are responsible for keeping him alive. For us mere mortals, we need to decompress at depths far shallower than his own.

The No-Decompression Limit (NDL) is essentially a time limit that all divers should be well aware of. The NDL dictates how long a diver can remain at a certain depth without being at risk of decompression illness. If you are wondering “how deep can you dive without decompression stops”, the answer to this question will depend on one’s given NDL.

As a rule, no diver should ever consider exceeding their NDL. Only veteran divers with many years of experience under their belt can safely pull off an NDL-exceeding dive. Even then, these dives always encompass a long list of added risks that you are better off not taking on.

The NDL is determined by how one’s body responds to nitrogen. As a diver descends, trapped nitrogen compresses in his or her body. On the way back up, it gradually expands through the process of decompression. Therefore, the body must rid itself of the nitrogen before it violently expands in the body. The NDL is the maximum allotted time that a diver can spend at a depth without the need to stop to decompress.

To avoid dealing with the hassle of decompression, there are alternative methods of diving that are designed to circumvent the effects of decompression. For example, saturation diving provides a suitable alternative when it comes to deep diving in a properly pressurized environment.

Saturation diving is equipment-intensive and is not for all divers. This is especially true of inexperienced divers who are just getting the hang of their own equipment. By adding more equipment into the mix, this can spell disaster for rookie divers who can become easily overwhelmed.

Many commercial divers and welders who spend long periods of time working on deep-sea projects are saturation divers. They use saturation chambers to live underwater for prolonged time spans without the need to expel nitrogen from their bodies. Clearly, only the most dedicated divers can sustain themselves in these long-term underwater environments.

The Laws of Gas

Like any physical matter, gases are subject to the laws of physics. No matter what, gases of any time, whether found in the atmosphere or miles below the surface, abide by these universal laws. Some of these laws are especially pertinent for scuba diving.

For example, for every 10 meters that a diver descends the air pressure rises by 1 atm. However, the surface pressure is also 1 atm, which implies that the partial pressure (or, “PP”) of the oxygen found in the air would be 0.8 atm at a depth of 33 feet. Sounds complicated, right?

Well, the laws of physicals are complicated. But, luckily for you, we can break them down into bite-sized chunks that are easily accessible for divers and diving enthusiasts alike. In a nutshell, it is important to understand the physical fact that gases compress when placed underwater. This rule is called “Boyle’s Law”.

It is guaranteed that divers who ignore the physical barriers provided by air pressure will surely suffer from nitrogen narcosis. When breathing in substances other than air, such as nitrogen, a diver must always be aware of the harmful effects of nitrogen narcosis.

Nitrogen narcosis, to the diver, will feel like alcohol intoxication. While this might sound pleasant to some, it is super dangerous for anyone who is diving far below the surface. In extreme cases, it can even render the diver unconscious. If left unattended, this can cause death or serious illness.

To prevent nitrogen narcosis, it is important that all divers respect the laws of physics while diving. In a nutshell, this means respecting one’s limitations when it comes to decompression. When a diver reaches depths below 130 feet, the risk of nitrogen narcosis rises sharply. Therefore, divers at such depths must always return to the surface in a slow and controlled manner.

How to Prevent Decompression Sickness

At almost any depth, a diver can run into the challenges posed by decompression sickness. The best rule of thumb when it comes to preventing the onset of decompression sickness is to invest in a good quality dive computer. Dive computers will be able to assess the buildup of nitrogen in your body in real time and determine your ascent speed accordingly.

Never deviate from the ascent speed dictated by your dive computer. Even if the surface is clearly within sight (as it often is), divers must always be patient on the come up. When disaster strikes underwater, it is generally due to overzealous divers who think they can outsmart their dive computer and rise to the surface without stopping.

To keep it simple, we came up with a short list of the most crucial rules for every diver to follow. By respecting these rules, you can help ensure a safe and fun dive with a lessened risk of decompression sickness.

If it is not already clear already: there is no definite answer to the question “how deep can you dive without decompression stops”. Ultimately, the answer depends on one’s individual tolerance to nitrogen absorption. Therefore, every diver below 20 meters should carry a dive computer on their person and follow its instructions carefully during their ascent.