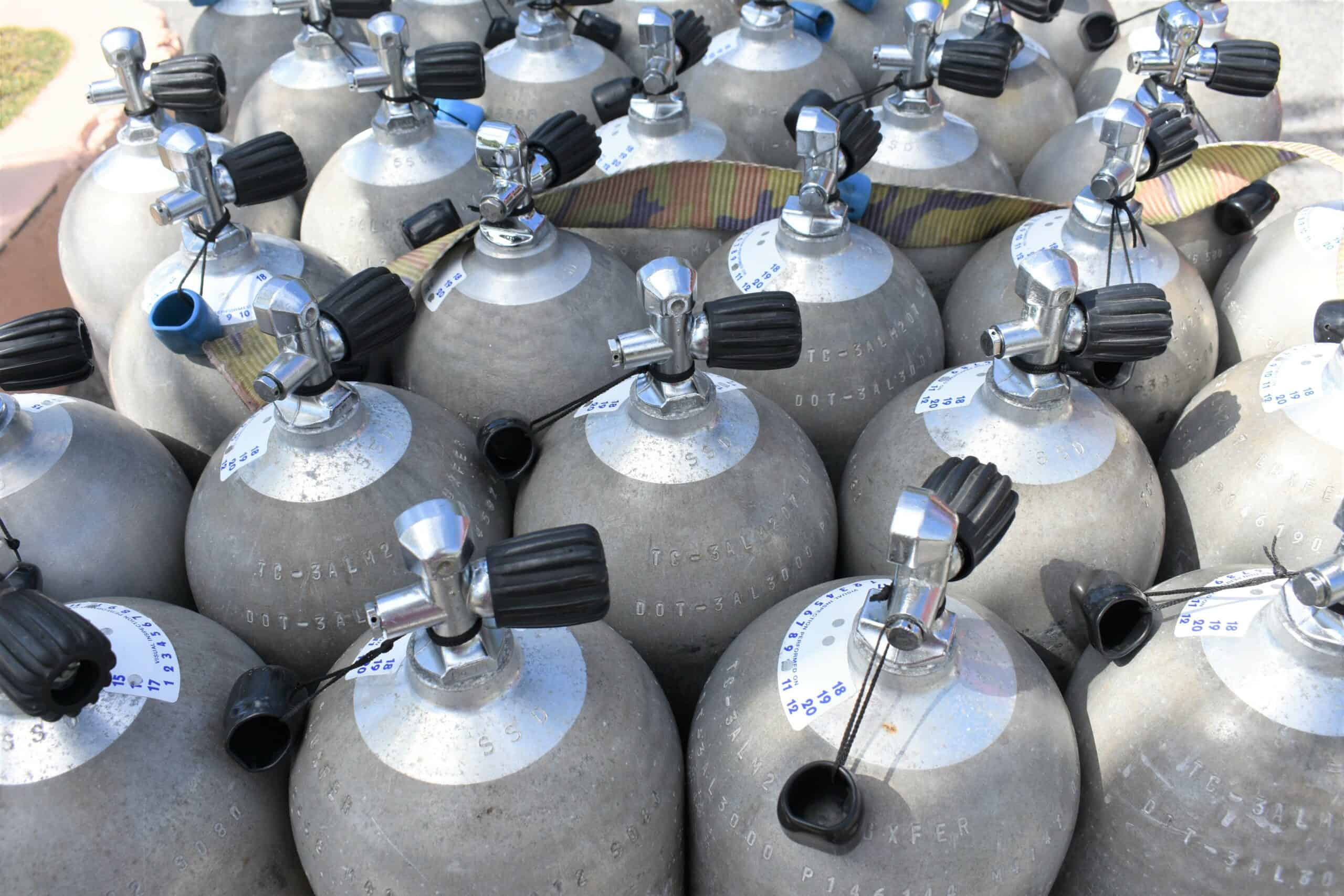 Marine exploration and recreational diving were made possible through innovations that help us breathe underwater. Since we need oxygen to stay alive, are scuba tanks filled with pure oxygen?

Yes, but very rarely because of the risk and danger associated with pure O2. For context, the air that we breathe is a mixture of several types of gasses. Approximately, only 21% of it is oxygen.

Therefore, the compressed air in a recreational scuba tank mimics that same composition. Although, there are specific situations that require tanks containing pure oxygen.

We’ll go in-depth on that in a while, so stick around.

When Are Scuba Tanks Filled with Pure Oxygen Used?

Some instances may call for the use of pure-oxygen scuba tanks, but divers need specialized training for that. Read about them below.

As you descend into the water, the pressure increases. This causes the nitrogen in the air that we breathe to dissolve into the body’s tissues.

Later, as you ascend toward the surface after the dive, the nitrogen in the tissues dissolves into the lungs. Then it leaves the body as we exhale.

However, after an intense technical dive, you can’t just ascend straight to the surface. Instead, you’ll need to take a safety stop every once in a while to give the body time to decompress, or safely release the nitrogen along with other gasses.

Divers usually plan a decompression dive to conclude technical, scientific, commercial, or military dives. Therefore, these are always discussed before the activity, so divers already know what to do when it’s time to ascend.

To speed up decompression, trained divers use tanks with higher oxygen content or sometimes pure oxygen. For safety, pure oxygen is only used in depths no more than 13 feet.

A hundred-foot dive could take a diver an hour to ascend, and about twenty minutes for half that depth. However, the body could take up to 24 hours to decompress completely or return to normal gas levels after the dive.

After scuba diving, nitrogen may form bubbles in different parts of your body such as skin, muscle, or joints. This results in decompression sickness, otherwise known as “the bends”.

Symptoms of decompression sickness may include the following:

The first aid for decompression sickness is giving the patient pure oxygen to breathe immediately after the dive. This usually soothes the symptoms, which is why divers may keep tanks of 100% oxygen on their scuba boat in case of an injury.

The patient will later be brought into a clinic or hospital for hyperbaric oxygen therapy.

There are times that you’re going to need to speed up the ascend by using pure oxygen during decompression. This allows the lungs to take in more oxygen to displace nitrogen.

Below are some tips to speed up a decompression dive and save time.

Before the dive, you’d already know the gas requirements, how deep you’re going, and an estimate of the dive’s duration. Consequently, you’d also have known whether you’re going on a recreational or technical dive.

When preparing for a technical dive, it’s recommended to discuss with your team how you’re going to execute the decompression dive. Using the information mentioned above, plan the distance and time intervals between decompression stops.

This is to ensure that you’re giving your body enough time to release the dissolved nitrogen in your body. Otherwise, you’re putting yourself at risk for decompression injuries.

A diver should know the skills needed during a decompression dive. For example, you’ll need to hover at a certain depth for a specific duration for effective off-gassing.

Not mastering certain skills could defeat the purpose of expediting the decompression dive. Even if you’re using pure oxygen, you could still waste time underwater when you’re not executing the moves properly.

Presence of mind is an absolute must during decompression diving, or throughout the dive, for that matter. This is for your safety, as well as that of the entire team.

Therefore, be aware of the potential dangers around you, but remain calm at all times. This will also help you remember the decompression plans and instructions as discussed before the dive.

For faster nitrogen release, shake up your body with light exercises during a decompression stop. Usually, simply swimming around the line does the trick.

This step helps the driver get in touch with his body’s orientation in the water for a smooth ascend. Remember to stick to light exercises only because shaking too much could make the nitrogen bubbles worse.

Why Not Use Pure Oxygen for Recreational Diving?

Scuba divers don’t use 100% pure oxygen to breathe underwater because it’s neither safe nor healthy. Here’s a more elaborate explanation.

We may not know it but we breathe in various matters as well, including aerosols, moisture, and other particles. Our bodies can handle these substances when kept at modest amounts.

2. The Risk of Oxygen Toxicity

Too much of anything could be lethal, even oxygen. The condition where there’s too much oxygen in the body is called oxygen toxicity, and here’s how it happens.

What is Oxygen Toxicity?

The hemoglobin in our blood is responsible for transporting oxygen from the lungs to other parts of the body. When there’s way too much oxygen, our body could get overwhelmed.

The excess oxygen could disrupt the central nervous system’s operation and lead to other complications. It could injure the retina and prompt temporary near-sightedness, as well as irreversible damage to the lungs.

If left untreated, it could even result in death.

What Are the Symptoms of Oxygen Toxicity?

Besides temporary near-sightedness, a patient suffering from oxygen toxicity may also experience coughing and difficulty breathing.

Fortunately, a healthy adult can fully recover from oxygen toxicity without any kind of treatment. In severe cases, however, such as a collapsed lung, the patient may need to use a ventilator.

Even if breathing pure oxygen was a safe option for a recreational dive, it wouldn’t be practical.

Regular atmospheric air is free, so all you need is a compressor to fill up the scuba tank. Luckily, this compressor is portable and easy to use, but make sure that you’re using the appropriate compressor type for safe, breathable air.

That said, tanks with pure oxygen may stand by until it’s absolutely needed.

Only licensed technical divers can use pure oxygen. That’s because recreational divers are only allowed no-stop dives wherein a decompression dive isn’t necessary.

Besides, scuba divers only use pure oxygen scuba tanks if they intend to speed up off-gassing. Otherwise, the decompression dive could still be successful even without using pure oxygen.

Are scuba tanks filled with pure oxygen? Yes, some scuba tanks are, but they’re not for recreational diving use.

Divers reserve 100% oxygen scuba tanks for administering first aid to a patient with decompression injuries. Other times, they use pure oxygen to speed up decompression after long, deep diving sessions.

Therefore, you won’t need pure oxygen for a leisurely scuba dive. You only need the same air composition as you would on land.