Many consider hookah diving to be the next big step forward for the sport of scuba diving. It seems that every year a new hookah dive system is released, or a former hookah rig is improved upon.

However, if you are like most new divers, you are probably wondering what exactly hookah diving is. And, for that matter, you are probably questioning why you should care. Well, look no further. In this article, our experts break down all there is to know about this alternative diving system, and why it might offer you unique benefits over air diving. 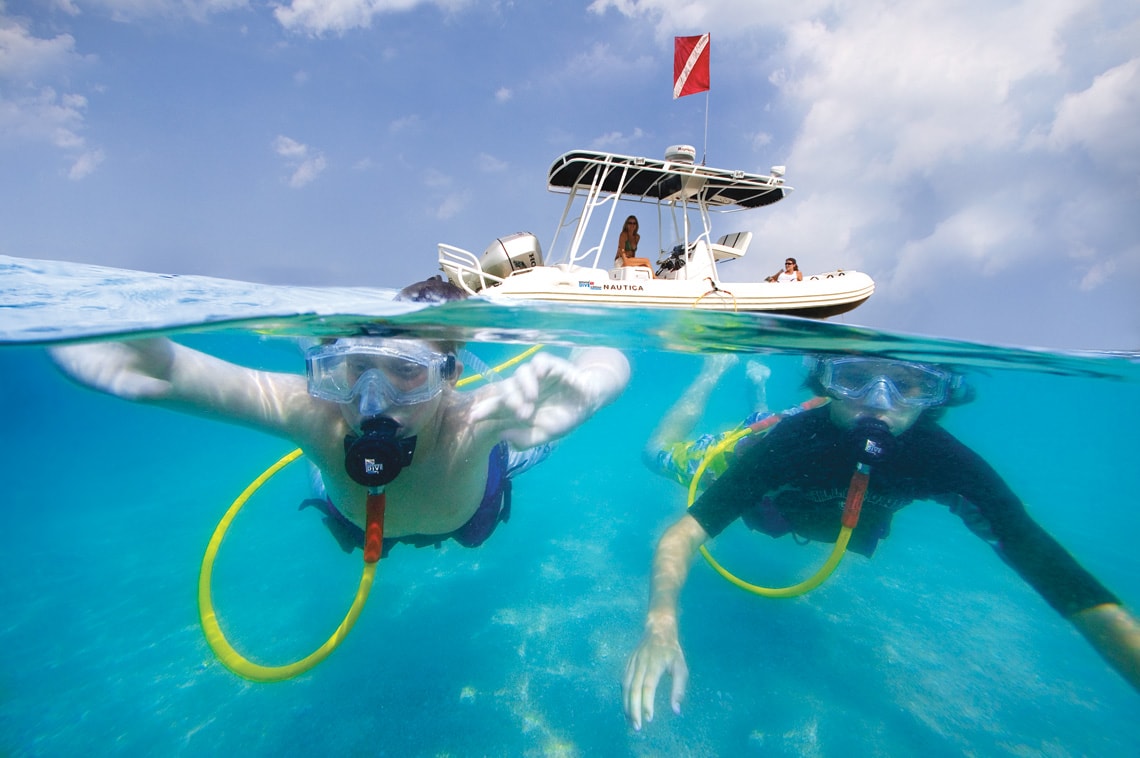 Hookah diving is, for many, a natural transition between regular old snorkeling and full-depth scuba diving. This is because hookah diving involves underwater exploration while towing a surface-level floatation device that feeds air through an umbilical hose. In other words, you can think of hookah diving as a long snorkel that can extend up to 100 feet underwater.

With hookah diving, divers no longer need to worry about exhausting their oxygen tanks or tampering with their breathing apparatus. Hookah diving is a more simplistic form of diving that allows divers to freely explore underwater environments without having to carry their air supply on their backs. Sounds convenient, doesn’t it?

The Benefits of Hookah Over Scuba

Hookah diving offers numerous benefits to divers that traditional scuba diving cannot. As you might imagine, swimming unbridled by the weight of a cumbersome scuba tank compressor or oxygen mask makes life easier for divers. Likewise, hookah divers never have to worry about running out of oxygen supply or decompression sickness, otherwise known as “the bends”. 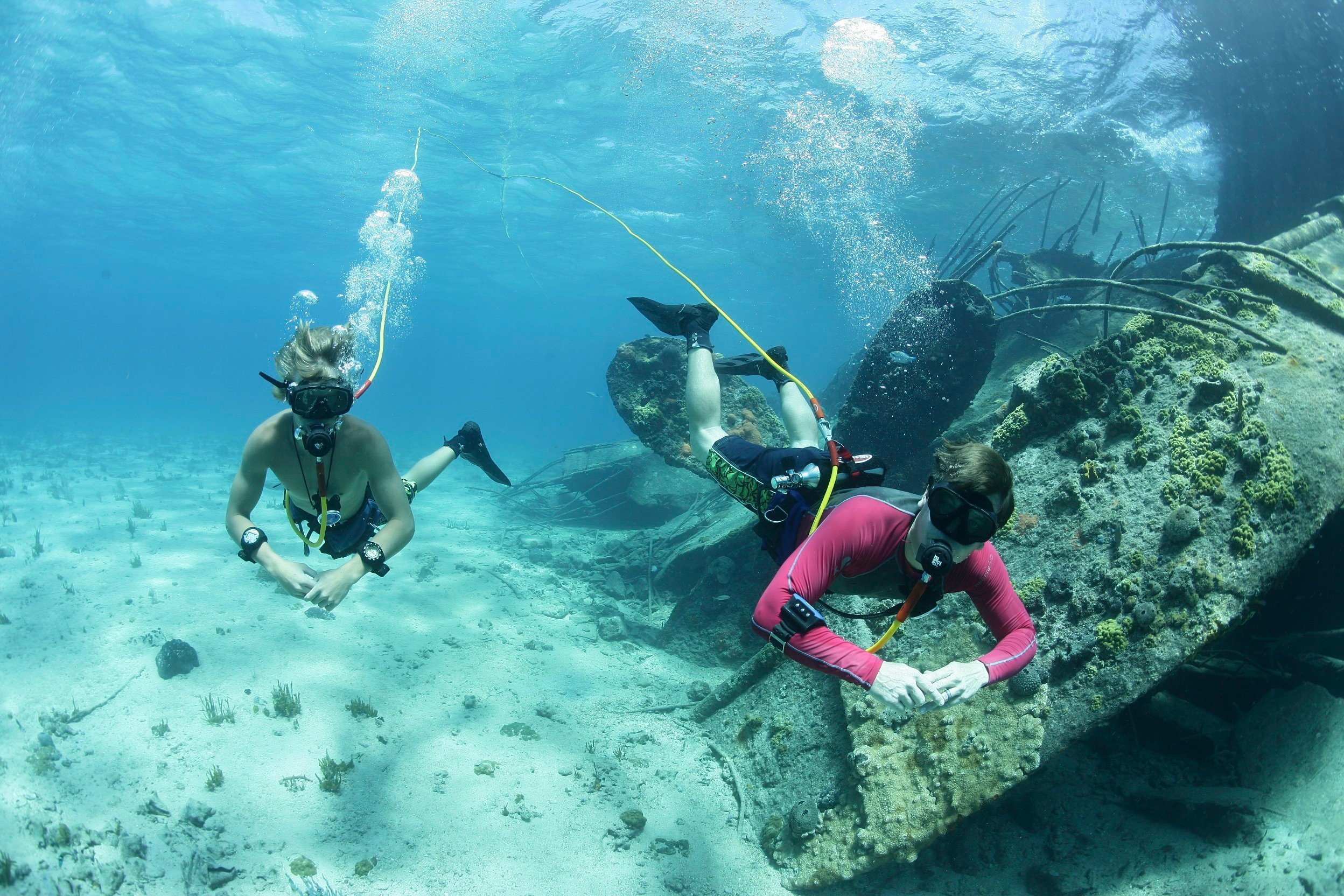 Unlike scuba, hookah systems offer a variety of safety benefits thanks to their lightweight nature. When diving hookah, divers are essentially tethered to the surface which makes diving too far below the surface impossible. For newcomer divers, this can be a potentially life-saving benefit as some inexperienced divers can erroneously descend too far into the depths.

As a consequence of staying relatively near to the surface, hookah divers are protected from the risk of decompression sickness. Decompression sickness, also known as “the bends”, or diver’s disease, is caused by dissolved gases being released from the body during depressurization. This usually occurs while divers are making their ascent to the surface.

When diving deep underwater, the air pressure changes drastically. This is also true of high altitude environments, which is why astronauts and pilots also suffer from decompression sickness from time to time. When it comes to hookah diving, the length of the air umbilical cord prevents divers from descending to depths where decompression sickness is prevalent.

Since hookah divers need to remain close to the surface, all divers on a team are encouraged to stay near to each other. As a result, divers are usually kept within eyeshot of other team members. Not only does this make diving safer for everyone involved, but it can encourage a more social and collaborative form of diving that many deep sea divers do not often enjoy. 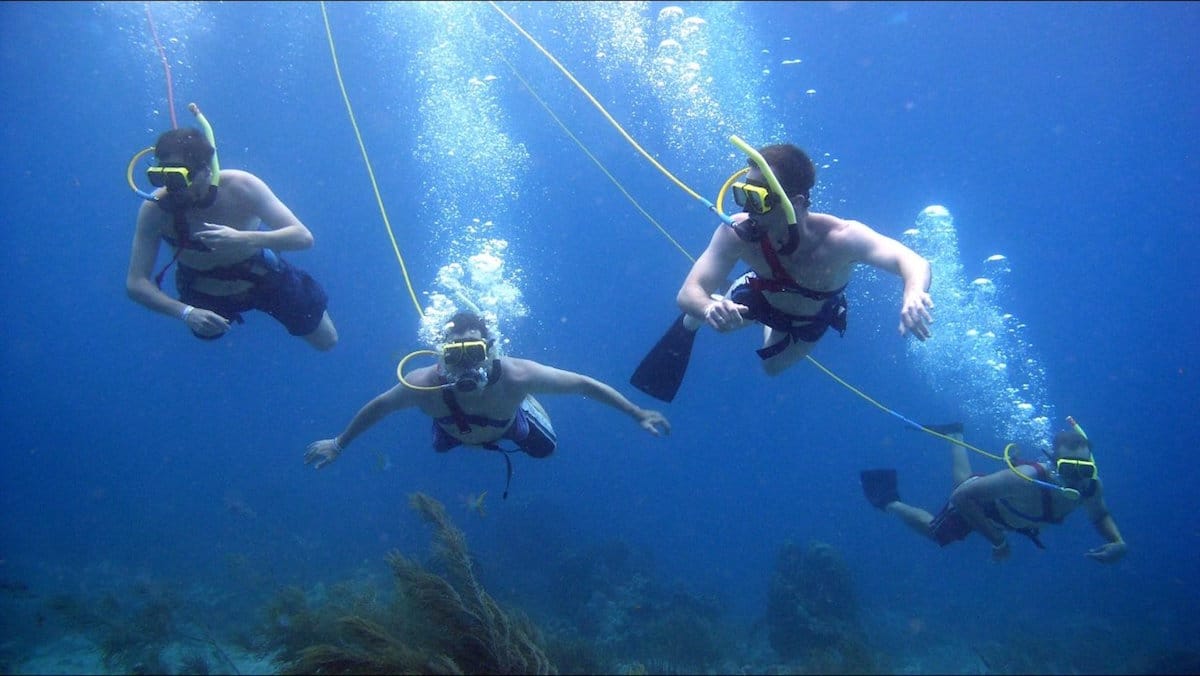 No Caves, No Problem

It should come as no surprise that hookah divers are barred from entering underwater caves. This is because hookah umbilical hoses simply do not extend far enough to accommodate a cave’s depths. This is both a limitation and a saving grace, as cave diving is a far riskier form of diving that should only be attempting by serious veteran divers.

According to some reports, such as those by the Tampa Bay Times, hookah diving has caused incidents of diving accidents to rise. However, it is important to note that these reports have been disputed by some veteran divers and diving organizations. Nonetheless, there are clearly many risks associated with hookah diving that need to be considered.

When diving hookah, you always run the risk of potentially puncturing your air hose. With hookah air systems are typically built of high-density vinyl and nylon, both of which are unlikely to puncture, there is never any guarantee that they can resist attacks from aquatic life. When up against the elements, sometimes hookah hoses can fail and cause catastrophic damage.

One of the main critiques of hookah diving from a safety standpoint is the fact that hookah diving skirts around scuba diving licensing requirements. Consequently, there is little to no training involved to legally hookah dive. This is in stark contrast to regular scuba diving which, of course, demands extensive training and certification.

It should go without saying that a well-trained hookah diver is at no worse a level of risk than regular divers. The only reason why media reports have indicated that hookah diving is dangerous is that many hookah divers are untrained. We firmly believe that all hookah divers should undergo the same degree of training of scuba divers. If properly trained, hookah divers are among the safety seafarers out there.

Overall, hookah diving is much friendlier to boats. This is because the absence of compression tanks and other heavy-duty scuba equipment makes hookah diving super streamlined and lightweight. This way, hookah diving takes up less space. On smaller boats and yachts, this can free up space and allow for a much more comfortable boat ride.

Also, without tanks and other equipment, hookah divers are less likely to nick or scratch the paint off your boat. When wearing heavy metallic tanks on your tank, you are at a much higher risk of bumping into the siding of the boat inadvertently. Therefore, hookah diving is your best option if you want to protect your boat at all costs.

The Convenience of Hookah Diving

For the minimalists among us, hookah diving is quite alluring. This is because hookah diving simply feels more lightweight and less burdensome than your typical scuba diving experience. When scuba diving, it is not uncommon to carry many kilograms of equipment on your back. However, hookah diving requires no wearable breathing equipment.

As a result, hookah diving is a free and liberating experience for many divers who are fed up with scuba gear. Diving hookah allows you to swim faster, reach farther, and generally maneuver as you please underwater without the constant threat of exhausting oxygen reserves. For many, this is a freer and more enjoyable form of diving.

While many think of hookah diving as being a glorified form of snorkeling, hookah diving is actually far more complicated than one would have you believe. Known as a “surface-supplied diving” system, hookah diving uses sophisticated equipment at the surface level to provide the diver with a safe and reliable supply of oxygen.

Many heavy-duty hookah diving systems require the use of a helmet that connects to the surface system via an umbilical hose. Unlike a snorkel, air cannot simply pass through a non-return valve and flow into the diver’s lungs. Rather, the air from the surface must match the level of ambient pressure in the helmet. Otherwise, the air will be blocked by pressurized build-up.

Therefore, the helmet and its attendant hose feature several exhaust valves. These valves allow pressure to be adjusted according to the depth of the diver in real time. When working properly, this causes the oxygen supply to freely flow at whatever level of pressure the diver is working at.

Still, think that hookah diving is a lot like snorkeling? Think again. Most serious hookah divers use emergency reserve tanks of oxygen that they carry on their person. These tanks act as backup air reservoirs that supply a steady flow of oxygen if required. This tank is constantly filled via the hookah compressor at the surface.

The reserve tank is quite sophisticated because it is constantly working to cool oxygen. It is a little-known fact that the oxygen supplied by hookah compressors is, in fact, hot. Sometimes, hookah air can reach dangerously high temperatures. A well-made reserve tank will constantly cool the flow of air so that it is a palatable temperature for the diver’s consumption.

One of the main drawbacks to hookah diving revolve around the fact that hookah compressors rely on a power supply. This can not only ramp up costs, but it also means that a boat, yacht, or dock needs to be kept nearby. However, this is a necessary feature of a hookah system as the compressor needs to work hard to filter the air and pressurize it according to the diver’s depth.