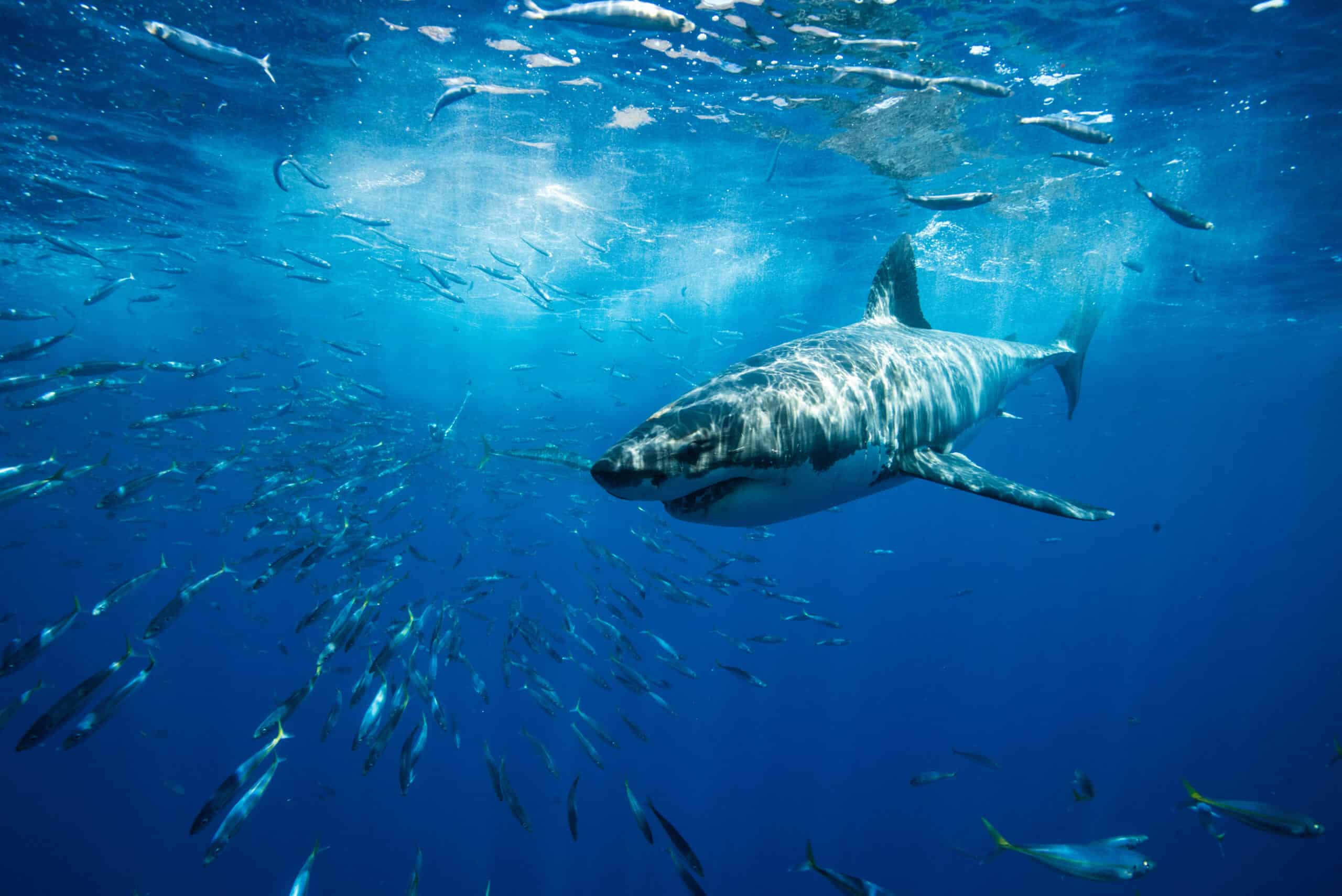 When you hear about shark attacks and then hear about scuba divers going into water that’s known to be inhabited by sharks, you can’t help but wonder, “Why do sharks not attack scuba divers?”

You may think that sharks do attack scuba divers. After all, these are the instances we hear about. However, that’s unfair for sharks.

In this article, we’ll clear the stigma around the water’s most feared apex predators, so keep on reading.

Why Do Sharks Not Attack Scuba Divers?

Going back to the basics, there’s a natural ecological system that creatures follow by default. It’s a trophic pyramid that includes what a creature feeds on and its possible predators.

Since sharks live in aquatic ecosystems, their main dishes are aquatic animals. So, it’s safe to say that humans are definitely not on their menu.

Not to mention, a shark wouldn’t opt for a dinner that’s wrapped in neoprene. They prefer feeding on smaller fish and invertebrates, while large sharks may opt for turtles, small sea lions, and seals.

So, to cut things short, the odds of a shark attacking a human with the intention of preying on them are close to none.

Add to that; sharks tend to avoid human contact. Rightfully so, as humans kill around 100 million sharks every year, whereas sharks cause around ten human deaths per year.

Are There Instances of Sharks Attacking Scuba Divers?

Of all the humans that jump into the water with sharks, scuba divers are the least at risk of a sudden attack.

Most victims of shark attacks were doing board sports or surfing (51%), followed by swimming (39%), then body surfing or horseplay (6%), and finally, free-diving or snorkeling (4%).

So, as a scuba diver, you’re least likely to be attacked by a shark when you’re enjoying your dive sessions.

Why Do Sharks Attack Surfers and Swimmers?

The main reason behind instances of shark attacks is confusion. The shark mistakes the swimmer or the surfer for their own prey, like small sea lions or seals.

This is primarily because swimmers and surfers spend most of their time on the surface of the water —much like a shark’s natural prey.

That’s why you’ll often find sharks taking a bite at a person and then running away when they realize their mistake.

On the other hand, a shark will attack a human if it feels threatened by it, be it a swimmer, surfer, or diver.

Also, if the human happens to be around the shark’s prey during a feeding frenzy, there’s a high chance that they might get attacked by mistake.

How to Stay Safe From a Shark Attack While Scuba Diving?

Now that the main triggers are out of the way, let’s look at how you can stay safe from sharks when you’re scuba diving:

It’s best if you steer clear from both dusk and dawn, as these times are when sharks come out to feed.

If you have a professional accompanying you, it’s safe to dive during those times if you’re curious and want to watch sharks when they’re most active.

Diving in clear water helps you keep everything visible, thus, eliminating any chances of accidental encounters with a praying shark that’s hiding in the mud.

Not to mention, some shark species, like bull sharks, like to hunt in shallow and murky waters.

As we’ve covered, sharks can accidentally pounce on people if they’re swimming on the surface, as they mistake them for prey.

Not only that, but a shark can mistake you for a dead animal or one that’s in trouble, which they consider an easy plate.

If you make sudden moves or splash around too much, a shark might think you’re a threat and initiate an attack.

What’s more, a shark might think you’re a distressed animal that’s easy to kill and eat.

When you dive with a group, you’ll have plenty of eyes watching out for possible predators or dangers.

There has to be at least one professional or expert, and most of the group should be competent divers.

Is it Safe For a Woman to Dive With Sharks During Menstruation?

Yes. While sharks do have an incredible sense of smell, and they can hunt down traces of blood in the water, it’s still safe to swim on your period.

Firstly, women don’t actually release blood once they get into the water. Secondly, even if some amount escapes, it’s mixed with mucus, fluids, and cells that aren’t exactly favored by sharks.

There are more than 500 species of sharks out there, but most of them aren’t found around typical diving areas. At least not the ones that could pose a danger to humans.

Great white, tiger, and bull sharks are the three species that are associated with most attacks on humans, fatal or non. Luckily, these aren’t the types of sharks around the most popular diving areas.

Jupiter in Florida is a popular diving destination, especially for shark sightings. However, the species there are Lemon, Hammerhead, and Tiger. While the latter type is associated with some attacks, the other two are generally safe.

Which Type of Shark Attacks Scuba Divers the Most?

Of all the reported attacks, the great white shark attacks humans the most. However, great white sharks tend to release their victims after biting them, as they don’t have a taste for human flesh.

That’s why it might be better to avoid places like Monterey Bay in California, as a lot of white sharks thrive there. Also, Coral Reef State Park in Key Largo, Florida, which has Nurse sharks and Bull sharks that may hide in the murky waters.

If you’re planning to go scuba diving and the question “Why do sharks not attack scuba divers?” is worrying you, we’re here to tell you that you should dive with confidence.

Although there are reports of sharks attacking, scuba divers are often safer than swimmers.

Not to mention, if you follow the proper precautionary measures and stick with local experts, you’ll be able to swim safely, even next to a shark!