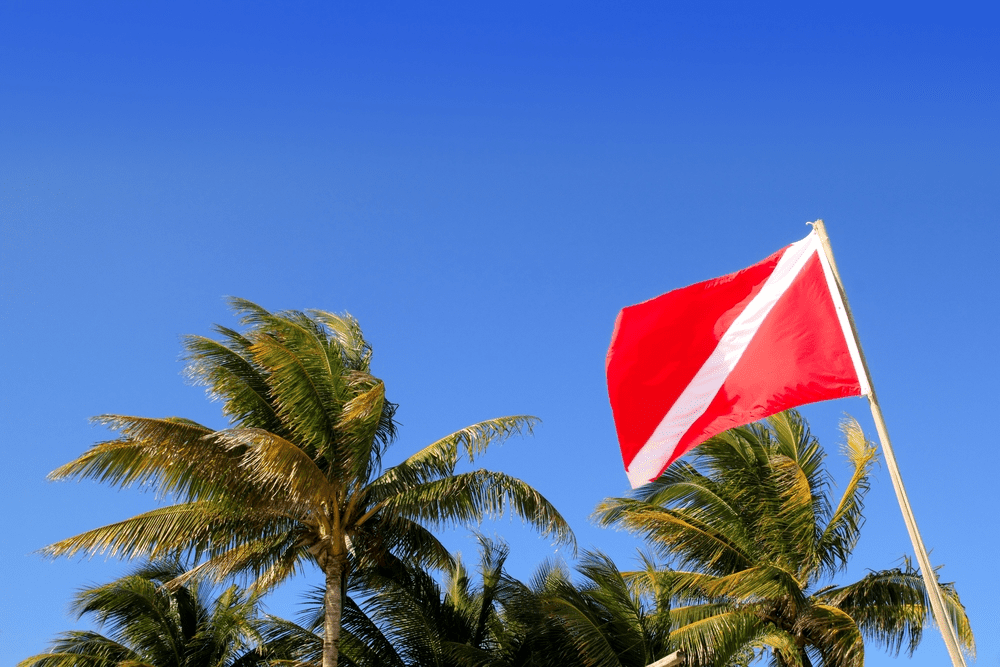 Divers face many hazards, and even under the best conditions, diving can be one of the most dangerous sporting activities or careers a person can have. Proper safety precautions are critical; no part of keeping safe as a diver or keeping your divers safe if you’re onboard a vessel deploying divers should be overlooked. Least of all, the iconic diver down flag that many people recognize on sight.

Diver down flags are an absolute necessity whenever a diver is underwater, whether pleasure diving or for an occupation, and the proper display of these warning signs is crucial in keeping your vessel and crew safe and free from accidents. Below, we look into the proper use and display of these flags.

What Is A Diver Down Flag?

A diver down flag, when properly displayed, warns all water-going craft that there is a diver or divers operating in the vicinity, unseen. They could be at depth or near the surface just beginning their dive or coming up at the end of it. It’s often easy to get disoriented underwater, especially in water that’s murky or muddy, and divers may not always surface right next to the vessel they dove from. Because of this, proper use and display of a diver down flag is absolutely necessary whenever there are divers in the water. These flags warn nearby vessels to proceed slowly and keep well clear of the flag or the vessel displaying the flag.

Most North Americans will recognize the iconic red-and-white diver down flag, with a white stripe crossing the flag diagonally from top to bottom. But, did you know there’s another kind of diver down flag that sees more use and should be used in any area likely to be trafficked by international vessels? How do the two flags differ, and when should each be used?

Though the red-and-white flag is well known to many in North America, there’s another flag more well-known and better recognized internationally. The two flags also differ slightly in their meaning as the red-and-white diver down flag has somewhat less precise connotations.

The international diver down flag is called an A, Alpha, or Alfa flag and is sometimes referred to as a Code Alpha Flag. It is often pennant shaped with a forked or swallow-tail outer edge. It is blue and white with a forked blue design on a white field. Even when these flags take on the traditional rectangular shape of most flags, the blue-on-white design lends itself to a swallow-tail appearance. This is the internationally recognized diver down flag, and it is employed in the waters of most countries in the world to indicate the presence of divers in the water.

Usually, this flag is flown from the dive vessel and is a clear indicator that the vessel cannot maneuver, often because there are deep-sea or commercial divers operating below the surface with air lines connected to the vessel above. It has a clear and unambiguous international meaning: “This vessel has a diver or divers in the water, keep at a safe distance, and proceed at slow speed.” In most places, this isn’t just a suggestion or warning to other vessels, it’s a legal requirement, and any vessel ignoring the blue-and-white diver down Alpha flag can be subjected to fines and even, in some cases, imprisonment for disregarding its message.

The North American Diver Down Flag

The red and white diving flag is a common sight in North America but is not commonly seen elsewhere. Its meaning is also less precise. The red-and-white banner familiar to so many Americans and Canadians was invented in 1956 by a veteran of the United States Navy named Denzel James Dockery. Mr. Dockery was an avid sports diver who, after designing his own home-made scuba gear, soon found that he needed a way to keep other boaters at a distance, as sometimes their curiosity would cause them to venture dangerously close to where he was diving.

He designed the flag to alert other vessels in the area to his presence, and the meaning and use of this now-iconic flag soon saw wide use and familiarity. While its meaning is clear to anyone familiar with watercraft and pleasure diving in the US and Canada, it is not internationally recognized, and vessels operating in foreign waters or international vessels venturing into North American waters may not understand its meaning. While commercial or deep-sea divers will almost always use the blue-and-white Alpha flag both to warn other divers and any other vessels operating in the area, sports or pleasure divers in North American waterways usually rely on the red-and-white Dockery flag.

While this may be confusing, both the United States and Canadian Coast Guards still recommend the use of the red-and-white diver down flag for pleasure or sport diving, as it is the flag most highly recognized in North American waters. Not only is this flag recommended, it is the legal requirement in most places, so not prominently displaying it could be punishable by law. While it is a matter of some confusion, Canadian regulations also call for the prominent display of the blue-and-white Alpha flag on any vessel conducting diving operations. The blue-and-white international Alpha flag should be rigid, either by use of wires in the flag or by other means, should be no less than one meter (or just over 39 inches) in size, and care must be taken to ensure maximum visibility.

While more dangerous than diving during daylight hours, night diving is sometimes necessary for commercial purposes, and some pleasure or sports divers do enjoy diving at night. In this case, where flags may be hard to see from a distance, the ship with divers down must display three round lights in a vertical line, with red lights at the top and bottom and a white light in the middle. It is also a good idea to display either the blue-and-white Alpha flag or the red-and-white diver down flag if you can keep both of them well illuminated and visible from a distance, though vessels must display the vertical white-red-white lights as described above, both to adhere to the law and to protect the safety of divers operating from the vessel.

A buoy is an anchored float that is used to serve as a navigation marker, and they are sometimes deployed in areas where divers are operating. If you are diving near shore without a vessel nearby, it is a good idea to take the precaution to deploy a buoy bearing one or both flags to be sure nearby vessels are aware of your presence and will avoid the area as appropriate. There are regulations for buoy markings, and every diver or vessel operator should be familiar with them and adhere to these guidelines. In North American waters, a buoy carrying the red-and-white diver down flag signifies areas where diving is currently taking place, although divers may surface away from the area.

In order to be legally compliant, any buoy deployed by a diver or a diving vessel must be white with yellow reflective striping, a minimum of six inches across, have an above-water size of no less than one foot in height, and must bear the letters “PRIV” on opposite sides of the buoy in large black letters. The buoy must also prominently display the buoy owner’s name and contact information. Lastly, the buoy must be securely anchored or otherwise moored in place to prevent it from drifting away from the area in which the diver is operating.

Ambiguous Meaning Of The Diver Down Flag

Another reason the use of the blue-and-white Alpha flag is encouraged (and in many places, required) is because dive shops and other suppliers have come to use the red-and-white flag as a sign that diving goods and services are available. It is often flown from buildings on land for that purpose, and even if spotted close to shore, should not be read to signify a diver anywhere in the area.

Is There A Need For A Diver Down Flag?

Absolutely. While there may be some confusion between the types of flags and when to fly them, both types of flags function to keep divers and vessels safe while operating in any given area. Though the Coast Guard recommends the red-and-white flag for sport or pleasure diving, flying the international Alpha flag alongside it will do no harm, even if it is not recognized by all boaters. To be safe in North American waterways, both flags should be displayed prominently according to the guidelines above. If you are diving or operating a diving vessel elsewhere in the world, it is crucial that the blue-and-white Alpha flag is flown as a warning to all other vessels in the area that you have a diver down and cannot maneuver. If you’re diving in waters off a country where you are not familiar with the local customs and legal requirements, or are otherwise in doubt of which flag to use, consult with a local dive master or a dive shop near the area you intend to operate, as they should be able to advise you on the best practice. When in doubt, fly both flags.

Whether sport or commercial diving, care must be taken to keep divers and vessels with divers attached safely from other boaters that may operate in the area. Flying both the blue-and-white Alpha and the red-and-white North American diver down flag will certainly do no harm, and (as noted above) is a legal requirement in many places. Being sure to operate a vessel and a dive operation with all required or suggested legal markings not only ensures the safety of divers, but it also enables nearby boaters to comply with recognized standards, lower their speed, and keep their distance.