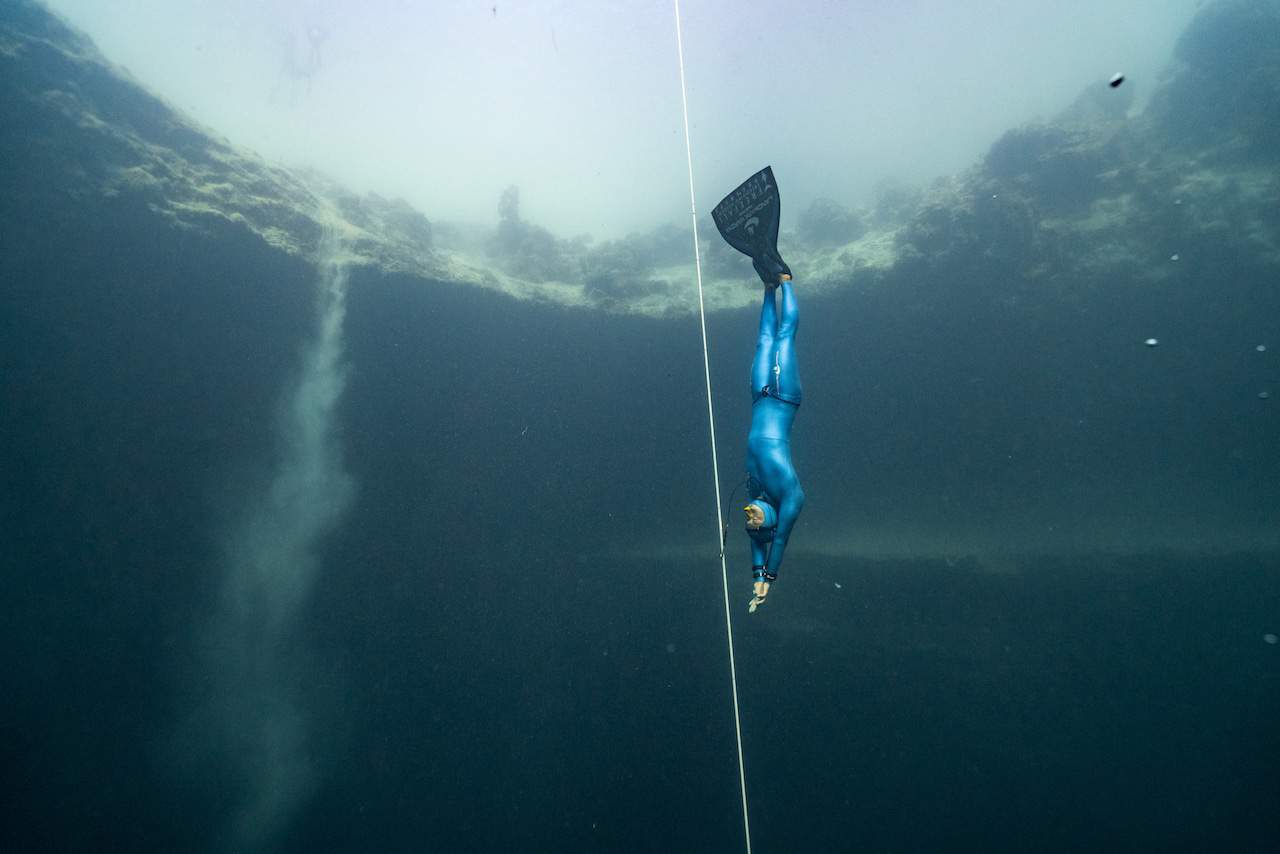 It used to be that few divers used the monofin, and it was a rarity in international freedive competitions. Now, it’s exactly the opposite—you don’t see many freedivers using bi-fins. The monofin enables freedivers to dive deeper in open water and longer in the pool, and though it’s a little tricky to use, once you master the skill it gives you a boost to your confidence and a marked increase in power.

We’ll look at the history of the monofin and how it is designed and constructed, and then go into all you’ll need to know to choose the one that’s right for you.

What Is a Monofin?

The largest marine mammals propel themselves with fins that are very much similar to this type of fin—whales and dolphins, known for their power and speed, have flat, horizontal, semi-rigid fins called flukes. A Russian fin-swimming competitor showed up at the European Fin-Swimming Championships in 1971 with the world’s first “artificial” monofin, which she had made herself from two supports made out of the strong but lightweight metal titanium, joined together by a kind of semi-rigid web.

The competitor, named Svetlana Uspenikaia, drew a lot of intrigued looks that day, but when it was time for the competition, she dominated. The following year, every member of the Russian team arrived with the same type of fin, and the shift toward this powerful but tricky to master innovation was underway.

These fins are now widely used for a variety of water competitions, most notably perhaps the sport of freediving, a form of underwater diving to great depths while holding one’s breath. No breathing apparatus is used, and power, speed, and control are of the utmost importance. Once mastered, the monofin is much more efficient for deep freediving than bi-fins, providing both more control and more power, and with them, a crucial boost in confidence. When you feel like you are capable of better performance, your will often perform better, especially in a sport as deeply psychological as freediving.

Is There a Benefit to Wearing a Monofin?

With proper technique, the monofin can allow a diver or other water athlete to gain unprecedented power, which brings with it confidence and a greater sense of affinity with the water. Proper technique is difficult, at first, to learn, as it’s meant to keep the body slim and streamlined to minimize drag and turbulence under water. The proper position can be difficult to achieve for those new to this type of fin, and can by uncomfortable for some until it is mastered.

It can take a while to hold proper form for the duration of a deep dive or other competition, so it is recommended that you practice with a monofin—even dry practice, on land—before using them in a competition.

The proper body position is a straight line with your arms extended behind your head, with your chin tucked into your chest. The intention is to minimize surfaces the water can grab onto to slow you down. One hand should be placed over the other, with your arms held as closely together as possible. You want to get your body as sleek and streamlined as possible, which reduces both drag and turbulence, and can make your dive faster as well as more controlled.

Your arms and hands should ideally form a straight line with the back of your body. Again, the goal here is to be as streamlined as possible, and proper form will take a while to perfect. The “kick” movement shouldn’t just involve your legs, but should start from mid-chest and move all the way down your body to your feet. Think of how a dolphin swims underwater, in an undulating line, and try to replicate that movement. This is the hardest part of maintaining proper form for most people as it’s much easier and instinctual to kick from the knee to generate force.

This isn’t nearly as effective as using the whole body, where almost every muscle from your shoulders down—especially your core muscles—contributes to the power of your stroke. The hardest part for most people when practicing the monofin is keeping their legs straight, as it is easier and much more familiar to bend at the knees and get propulsion that way. This is not as efficient however as using the whole body, particularly the core muscles, and this is why training for using a monofin can take time for some people.

Guide to Choosing the Best Monofin for You

Many factors go into determining the best fin for every individual, and everyone will have different preferences of swimming styles. The best overall advice would be to try to borrow fins from other divers so you can determine what your preferences are for things like the comfort of the foot pocket, blade stiffness, and blade angle.

If you’re unable to find a loaner monofin, it may be useful and in your best interest to purchase a cheap, soft bladed fin while you work on form and technique. One thing to be especially aware of is the snug fit of a monofin—they are very tight, to prevent loss of power transfer during the kick. You may want to invest in neoprene socks for comfort until you get used to them (or even afterward).

Basic monofin design is a single flexible blade attached to a pair of foot pockets, but the variance possible in these components is considerable. As with any fin, mono or bi, you want the most efficient transfer of power from your muscles to the fin. With this type of fin, this power transfer is dependent on a very tightly fitting foot pocket, as the movement should ripple down your body from mid-chest, with your legs tightly together and moving in unison. You want to look like a solid

When considering the blade, it’s good to know that the thicker the blade, the more water it displaces, which makes the monofin harder to move through the water. There is virtually no limit to the thickness of the monofin blade, but it’s important to use one that’s not too thick, as this will lead to muscle fatigue and possibly cramping while you’re first training to use it.

The blades of these fins can be made from plastic, fiberglass, carbon fiber, and carbon and glass fiber composite. They are thickest towards the foot pockets and thinner towards the edge of the blade, with considerable variation in thicknesses. Layers are often shaped to create movement within the blade itself, without altering the overall shape of the monofin.

Wearing and Training with the Monofin

The fit in these is so tight that you may find yourself having considerable difficulty even getting a monofin on for the first time. Wet everything—your feet, your socks, and the foot pocket, and if you’re still having difficulty, it may help to use soap to ease your foot into the fin. If, like many people, you come to favor a very tight monofin, you may wish to look into other, water-based lubricants to get your foot into the fin. Men with considerable hair on their feet may need to shave to get the fin to fit, and many people find that putting their feet into plastic bags and then into the fin helps considerably.

The proper technique to putting on your fins is to ease one foot in by moving or wiggling the blade from side to side, then put the other foot in the pocket. Because of the force needed to put the fin on, this is best done out of the water. Fins with a heel strap should be worn in such a way that the strap rests on the back of the heel, on the boniest part of the back of the foot, and never over the Achilles tendon, as this could cause injury and will ruin your form.​You will also want to train sparingly and for short periods of time when you’re first getting used to the fin, as it takes time to relearn the kicking technique to engage all of your core muscles and building up the specific flexibility and strength needed will take some time. Muscle cramps may also be an issue, so go slow and be aware of what your body is trying to tell you. If your muscles feel tight or fatigued, it’s time to rest. Take it very easy while you adjust to this new way of swimming.

This type of fin can—and will—change the way you dive. Carefully weigh all the considerations above, take your time and go slow, and seek out expert advice on training and upgrading your fin. Again, it’s best to borrow fins from other divers if this is an option, or to buy a soft-bladed fin at first as this is the easiest to move through water. Whatever you opt for, with proper training and diligence, you’ll find yourself moving through the depths with all the grace, power, and speed of our mammalian cousins, the dolphin, who may have inspired the design of the first prototype. Happy diving!