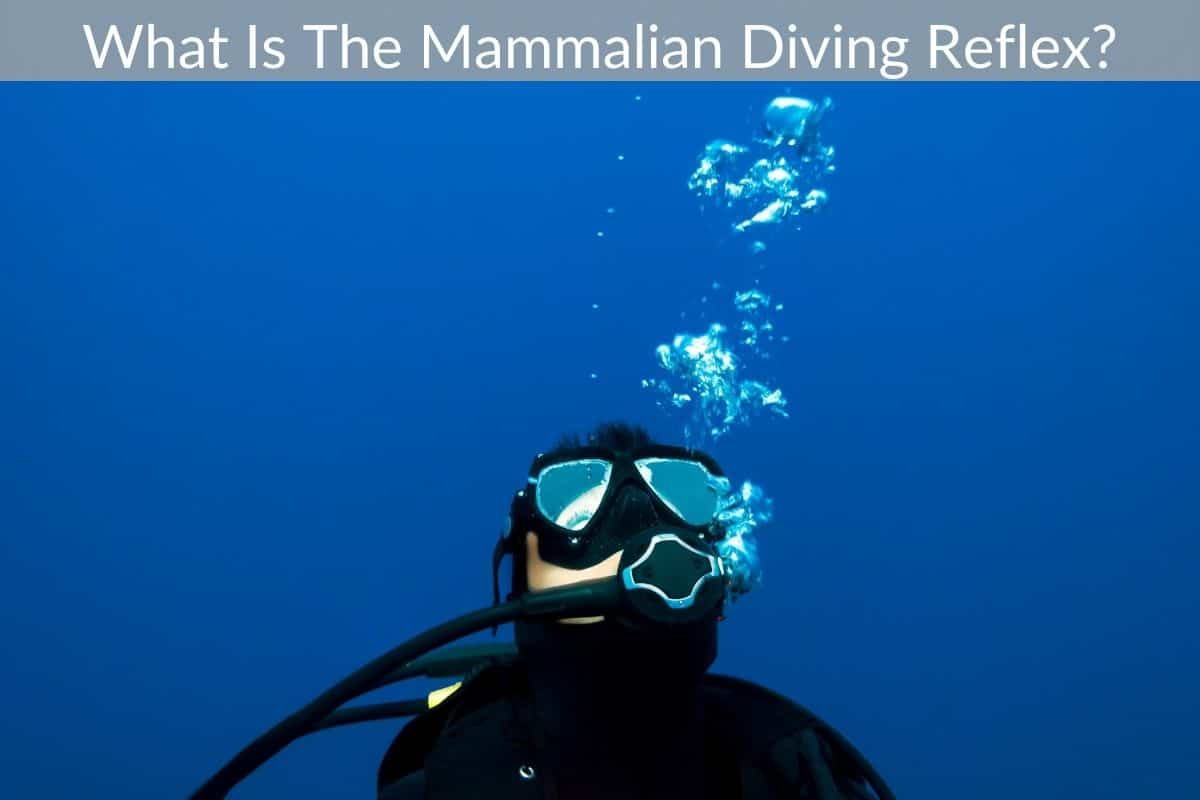 The Mammalian Diving Reflex, also known as a diving response or diving reflex, is the unique set of reflexes that kicks in when a mammal that normally breathes out of water gets immersed in water. This capability is one adaptation that remained from the time when all life developed in the water. This response is notable in aquatic mammals such as whales, dolphins, otters, seals, and muskrats among others.

In other animals such as humans, babies from birth to the age of six months, and diving birds such as penguins, ducks, and pelicans among others, the response is less significant. In layman’s language, the mammalian diving reflex is a clever adaptation of the body that enables it to survive when it is experiencing low oxygen levels.

What Is the Mammalian Diving Reflex?

When a mammal goes in cold water, either in the sea or an artificial body of water such as a pool, their body experiences some changes as a result of the mammalian diving reflex. A group of free divers experimented with this phenomenon in 1962. They realized that the divers who reached great depths in water without the help of breathing paraphernalia had their heart rate reduce significantly. This was true despite the divers doing vigorous activity underwater like swimming fast. To still have the ability to move in the water despite the depth and the enormous atmospheric pressure was puzzling to the divers.

Diving mammals like seals, elephant seals, and sperm whales are just some mammals that are known to have an excellent, well-developed mammalian diving reflex. They are known to be able to hold their breath underwater for close to an hour enabling them to look for food without having to come up for air regularly. There are several factors that allow them to do this.

These animals have a lot of blood, and subsequently a significant number of red blood cells. This enables them to store more oxygen through the oxygen-binding molecule referred to as myoglobin in their muscle (the reason why seal or whale meat is so dark). They are also able to bind the oxygen in a protein called hemoglobin.

Fun fact, the mammalian diving reflex is a neat physiological adaptation that can help reduce anxiety by doing something as simple as splashing cold water on your face. This triggers the mammalian reflex, and the body gets into a relaxed state in anticipation of the limited oxygen.  This is the technique that professional swimmers and divers use to allow them to stay underwater for as long as they do without drowning or their lungs collapsing.

What Is the Science Behind the Mammalian Diving Reflex?

The mammalian diving reflex comes into effect when the face of an air-breathing mammal comes into contact with cold water or has all of its face submerged in water. This effect triggers neural processing, originating in the carotid chemoreceptors in the nasal and sinus cavities and the areas connected to the trigeminal nerve in and around the face. The nerve sends information to the brain that the face has come into contact with water and the autonomic nervous system, through the vagus nerve, sends a response forcing the nasal pathway to close.

There are also a series of physiological changes that occur so that the body can cut down on the use of oxygen to only the most essential of activities. The effects that can be detected when the mammalian diving reflex is activated are mostly on the cardiovascular system. They include: peripheral vasoconstriction, a slow but steady decrease in the mammal’s heart rate, the redistribution of blood to the vital organs to reduce waste of oxygen in the body, the release of stored up red blood cells from the contracting spleen and in humans, and the rhythm of the heart seems irregular due to the stress.

All aquatic animals or natural divers have tweaked their physiological response to water resulting in a sophisticated system that allows them to stay submerged in water for an extended period without needing to breathe. This enables them to conserve their oxygen levels until they come up for another air intake.

The apnea and its duration, peripheral vasoconstriction, bradycardia and the redirecting of blood to vital organs are some of the most critical changes that occur during a mammalian diving reflex. All these characteristics are not different for terrestrial animals although they are unable to stay long under water without needing air.

5 Changes That Occur during the Mammalian Diving Reflex

The heart rate decreases by about 10-25% immediately when the face hits the water. This is called bradycardia and can also happen even when someone splashes water on their face. When the heart rate slows down, the rate of oxygen being absorbed by the red blood cells reduces, allowing the body to conserve the oxygen it already has. In turn, the vital organs also use the available oxygen effectively. Bradycardia leads to an extension to the time spent in the water by free divers.

The blood cells become narrow to reduce the blood that flows through the muscular contraction wall of the blood vessels. This attribute is referred to as Peripheral vasoconstriction. When this happens, the atmospheric pressure increases slightly, and as a result, the mammal goes under water.

There is a need for more oxygen flow in the vital organs like the heart, lungs, and brain in this stage, thus the capillaries in the toes, fingers, hands, feet, arms and any other peripheral organ become smaller, reducing the blood that can flow in these areas. The oxygenated blood moves into the vital organs as they need higher amounts of oxygen than most of the peripheral organs. This is the reason the mammalian diving reflex comes in handy.

3. Blood Moves from Other Body Parts

According to Boyles law, the deeper in the water you go, the higher the atmospheric pressure. This affects the lungs because the air in them compresses as the free diver goes deeper and deeper into the water. The blood, therefore, shifts because of the peripheral vasoconstriction caused by the diving reflex. Most of the blood will move towards the chest cavity where a majority of the vital organs are, and space is created when the air in the lungs is compressed.

Since blood is a liquid, it will not be compressed, and its volume remains constant despite the depth the diver reaches. The blood will continue to fill the space that is left when air keeps reducing due to the pressure difference in the lungs. This prevents the lungs from collapsing despite the ever-growing atmospheric pressure in the water. This blood moves from other parts of the body.

The spleen starts experiencing contractions due to the high atmospheric pressures in the water. The role of the spleen is to store large volumes of blood that move through the body. As discussed above, the blood shift will affect all organs, and the spleen is no exception. The spleen will contract and will be forced to release the blood it has into the respiratory system. The oxygenated blood released does two things for the body. First, it increases the oxygen levels that can be used by the body; and second, it improves the supportive fluid capabilities of the blood in the lungs and other organs in the body.

Cardiac arrhythmias occur specifically in humans. When the mammalian diving reflex is triggered, there is an increase in the cardiac parasympathetic nervous system activity. In simple terms, the body can have irregular heartbeats due to the changes that are taking place in the body. This increased activity helps regulate bradycardia (where the heart rate is too low- at about 60 beats per minute) and as a result, leads to ectopic beats (disturbances in the heartbeat rhythm when a free diver holds his or her breath before a dive)

The mammalian diving reflex is very important to all mammals and especially for humans as it enables us to stay underwater for an extended period. It can be strengthened over time through consistent and intentional practice to build experience.  For an average person who is not swimming or diving, the mammalian diving reflex can help with relaxation and relieving stress and anxiety.

You can trigger the effect by holding your breath and by splashing cold water on your face. By placing a cold compress or towel on your forehead and the area around the trigeminal nerve (around the nose), the response will occur. This will cause your pulse to drop and your stress levels to reduce because the mammalian diving reflex will stimulate the vagus nerve.

The benefits of this adaptation cannot be stressed enough. People can swim for recreational purposes, it prevents us from drowning instantly when accidents occur, and it makes water sports and exploration of the deep sea possible. The mammalian diving reflex prevents our lungs and other internal organs from collapsing when we go into a deep body of water with high atmospheric pressure.