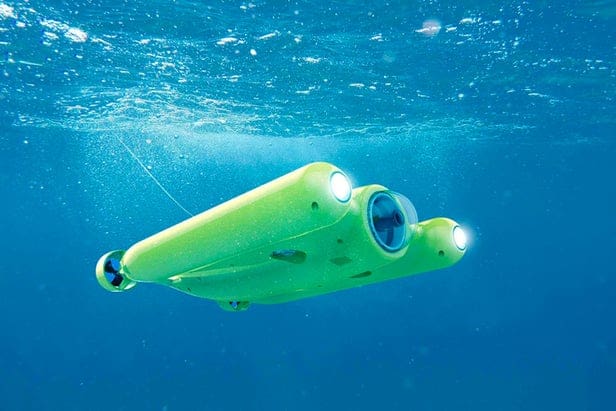 ​A not-so-secret fact is that 95 percent of our planet’s oceans have yet to be explored. This makes under the water the last real frontier for humanity. The problem with that is that scuba divers can only go so far, no matter how experienced or advanced their equipment is. Physical limitations alone create a barrier that can’t be passed. Submarines aren’t available to most private citizens. One way the world’s salvagers, scientists, explorers and filmmakers have responded to this challenge is with the use of underwater drones.

What Is an Underwater Drone?

An underwater drone serves the same function as the more common aerial drone; to take pictures and provide surveillance from angles and areas that a videographer could never reach of their own accord. An underwater drone is waterproof, and most models use tethers due to the difficulty that radio waves have with traveling through water. Some models use Wi-Fi connectivity to reduce or eliminate the need for hard-wire connections, but they are less reliable. Underwater drones are also more expensive than most aerial drones.

What Equipment Do Underwater Drones Use?

​While many drones models have built-in cameras, some models require GoPro Cameras to be attached to take pictures or record video footage. The GoPros that are compatible are usually of the Hero line. Underwater drones also use computer technology and autonomous sensors that can link to smartphones or tablets. Some drones are equipped with sonar devices that can locate fish in the water, which is useful for fishermen looking for an edge or scientists performing observations.

​For recreational users or beginners, a wireless drone is the easiest type of drone to use from a control standpoint, but due to the water, those drones would be the least capable and least stable drones to use. They would be unsuitable for any serious operation. Tethered underwater drones have the highest bandwidth and are the most stable drones. The direct connection allows it to perform consistently and at greater depths, though the setup may intimidate recreational operators. Drones capable of functioning autonomously are better for solo divers because they won’t have to worry too much about the controls, and they can focus on their dive.

​Is There a Need for an Underwater Drone?

Underwater drones serve a variety of needs to a variety of different users. Some people only want to use the drones for fun while fishing or scuba diving on vacation, and others use them for more serious applications, such as treasure hunting, salvaging, military operations and scientific observations.

​Recreational Use vs. Professional Use

​Underwater drones used by recreational operators, such as scuba divers on vacation or someone who wants to see what they can find, would want to concentrate on drones that are more user-friendly, inexpensive and lighter. If the user wants a drone for a professional purpose, such as salvage/treasure hunting, a professional videographer, or someone performing an underwater experiment, then the focus will be more on sheer performance and depth capabilities.

​Many underwater drones are capable of live streaming the footage that they pick up. This makes it useful for filmmakers, bloggers, and social media influencers who may want to bring their audience along with them as they explore the lakes and oceans.

​GoPro Cameras from the Hero product line are the only GoPro Cameras compatible with the underwater drones. The key when choosing a GoPro Camera is to look for one with a high frame rate, to able to keep up with fast moving fish, swimmers, and to be able to produce smooth slow motion shots. The most advanced GoPro in the Hero line is the Hero7.

​What to Look for When Buying an Underwater Drone

​The first thing anyone who seeks to purchase an underwater drone should look into is battery length and maximum depth. A long battery life ensures you get as much footage as you can, and the deeper the drone can go, the more you’re liable to see. After that, it’s a matter of what you can afford and the functionality you need.

​A Guide to Buying an Underwater Drone

As previously mentioned, the varying types of drone operators will all have different needs and requirements when purchasing an underwater drone, but the main things considered are:

What Are Some of the Best Underwater Drones for Recreational Use?

If you’re only fishing or diving for fun, your depth capacity requirements wouldn’t be all that high, and you wouldn’t be willing to spend as much as professional users. With this in mind, some popular models for beginners and recreational users are the Fathom One, the Biki, and the CCROV.

The Fathom One is an extremely portable drone. Its side propellers can be removed, allowing for the Fathom One to be placed in a backpack. While it may not last as long or go as deep as some higher grade drones, the Fathom One is reasonably fast and can be purchased for under a $1,000. It’s highly accessible for rookie drone pilots who are looking to get their feet wet in underwater exploration.

The Biki is a little drone that is autonomous and shaped just like a fish. It even propels itself with a little fin-shaped propeller. This option has obstacle avoidance software and has a built-in camera. Like the Fathom One, it’s also relatively cheap. It doesn’t have a very high performance, but for shallow water exploration and fun, it’s adequately equipped. It’s best suited for shallow water divers and swimmers.

The CCROV has a small size compared to that of other ROV drones, but the major selling point is its high maneuverability and how easy to deploy and/or rewind it. This makes retrieval a quick and easy process. The tether is not very long and the battery life only goes for an hour, so this isn’t suitable for many professional applications.

​What Underwater Drones are Suitable for Professional Use?

​If you intend on using a drone for treasure hunting, salvaging, business reasons or scientific research, then price usually isn’t a major issue (or it shouldn’t be). At this level, you’re likely wanting to invest in a reliable, high-performance model that will get the job done and done right. Popular high-performance models are the DTG2 series, Blueye, Power Ray and iBubble.

​The DTG2 series of drones come in four models that are all designed for increasingly heavy duty tasks. They were never meant for recreational use. The Starter, Pro, Smart and Worker models mainly differ in depth capability and tether length; all the models have a long, six to eight-hour run time, powerful lighting capabilities, and an advanced camera with a 330-degree field of view.The most advanced model, the Worker, comes equipped with grabber arms and auto depth features, making it ideal for salvagers and treasure hunters. The DTG2 series drones are highly customizable; even more equipment can be added on. The Starter model costs over $3,800, and the Worker will run at about $10,000. These are commercial grade drones.

​The iBubble may have a rather short run time of one hour, but it’s one of the most maneuverable, fastest models available. The iBubble is autonomous with avoidance technology, making it a higher performance alternative to the Biki, which is rather slow. The iBubble doesn’t require a tether, further adding to its maneuverability and movement. The downside is that it doesn’t have a camera built into it, and it requires a GoPro attachment, but many serious scuba divers would find this easy to use.

​Developed in Norway, the Blueye is a highly advanced drone that can be controlled by a virtual reality helmet or goggles, which makes for ease of control and, to be honest, sounds futuristic. It has a decent run time of two hours and has been used for exploration, inspections, environmental monitoring, aquaculture farms, and in the shipping industry. It’s one of the pricier models at $6,000, but it balances that price tag out with its performance and advanced technology.

​Sensor arrays, sonar, a remote bait drop, and a four-hour run time makes the Power Ray the ultimate drone for fishermen. Filmmakers, scientists and treasure hunters will also find the Power Ray useful. It can send information about nearby fish, water temperature, depth, landscape and more to your smart device, and you can acquire it for under $2,000. Value-wise, it’s probably one of the top underwater drones available right now.

​Underwater drones serve a multitude of purposes for a multitude of users. As technology continues to advance and current models become obsolete, we can expect to see more and more people using drone technology for both personal use and commercial purposes. Scientists and explorers may even make a dent in the 95-percent unexplored oceans. In the meantime, current models will continue to give people a peek into the world underneath our waves.