Why The Oceanic Whitetip Shark Is Listed As “Threatened”

We will take a closer look at the oceanic whitetip, why we should be concerned about its decline in our oceans, and if other sharks face the same threat. 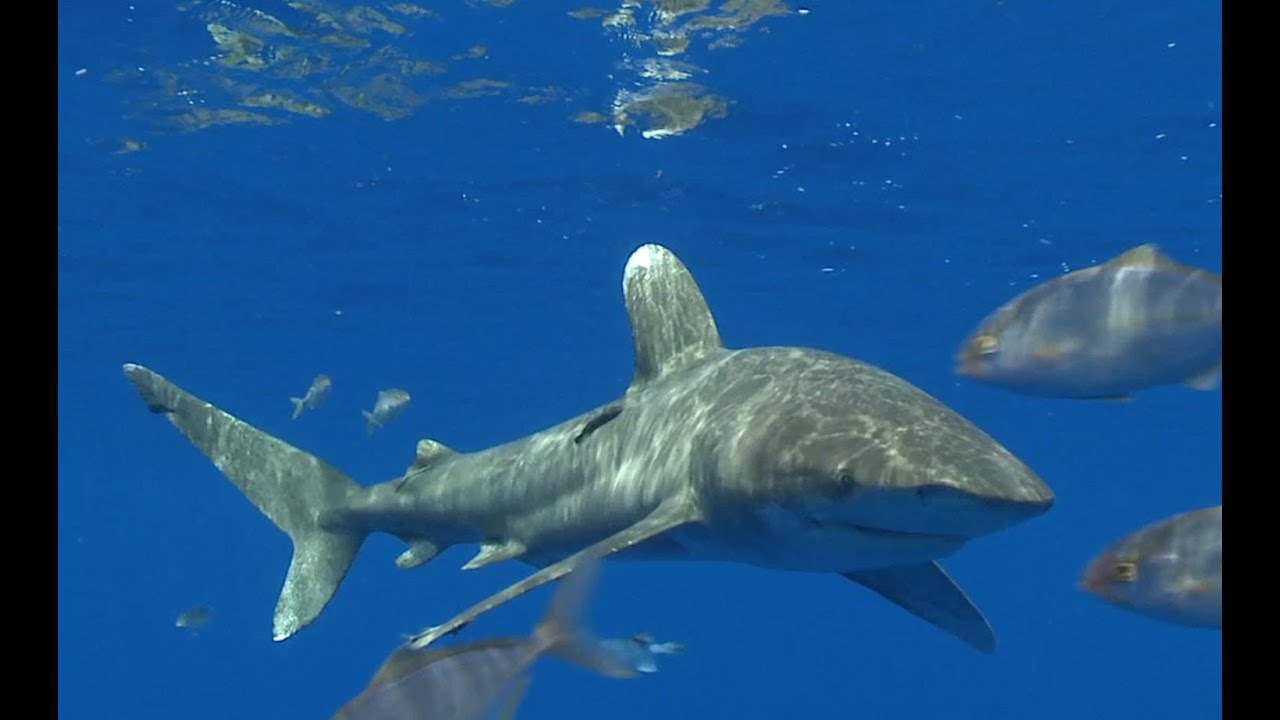 If you live or vacation near the Atlantic Ocean in the U.S., you may be familiar with the oceanic whitetip shark, as it tends to hang out in the area when the waters are warmer. The oceanic whitetip lives in the open ocean, which makes it one of the most widely ranging sharks.

The whitetip is easy to identify because of the white tips on its fins; the dorsal and pectoral fins have more of a curve than the “classic” point of other sharks, like the Great White. Even though the oceanic whitetip has some characteristics that make it easier to identify from other species of sharks, the whitetip could easily be mistaken for other sharks.

There are over 400 shark species, and eight subspecies, but many people (who know very little about sharks) assume that a shark is just a shark. Like most shark species, the whitetip is slow to grow and may live to be 30 years old while it’s not uncommon to come across a shark that’s decades older.

Since it’s an apex (or alpha) predator like other sharks, the oceanic whitetip is at the top of the food chain, typically eating bony fish like skipjack or tuna and the occasional squid. Oceanic whitetips may eat sea turtles, birds, and marine mammals; it all depends on what food is available while the shark is constantly moving and on the hunt for something to eat.

Many people assume that whitetips are man-eating sharks. When the USS Indianapolis went down into the Pacific Ocean, in 1945, there are many stories from survivors that talk about sharks circling the wreckage and watching fellow crewmates being attacked and killed by sharks.

Some experts believe that there’s a good chance that oceanic whitetip sharks were on the scene of the tragic accident, due to their thriving population at that time.

While they have been known to attack and kill humans ever since sharks and humans shared the same waters, humans are not likely to be there number one food choice (again, it all comes down to what’s available and how hungry the shark is).

Even though oceanic whitetips have done their fair share of maiming and killing, you’re still more likely to die from the flu or a fall or even get injured by your toilet than killed by a shark in your lifetime. Do some sharks pose a threat? Certainly, but sharks are at a greater risk of being killed and injured. What is making the oceanic whitetip “threatened?” Humans.

What Does “Threatened” Mean? 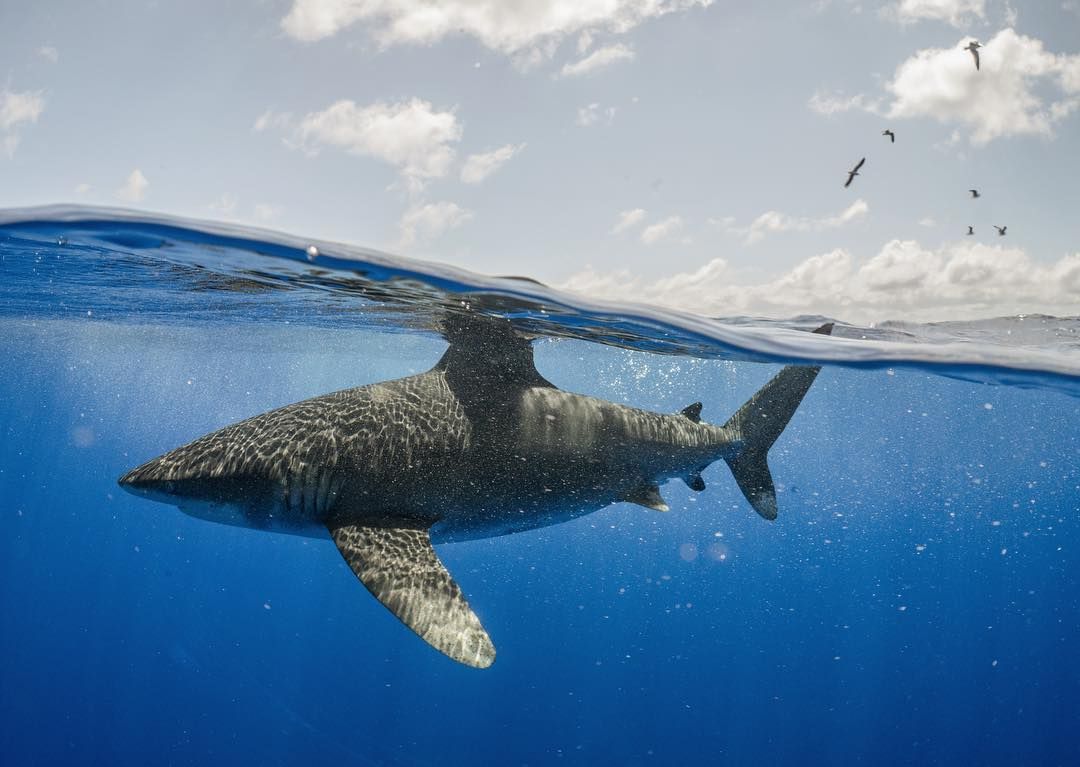 In 1973, under the Nixon Administration, Congress passed the Endangered Species Act (ESA). The ESA was enacted at a critical time when native plants and animals, throughout the U.S., were at high risk of being extinct.

The ESA is responsible for recovering and protecting vulnerable species and their ecosystems. By working with the U.S. Fish and Wildlife and the National Marine Fisheries Service (NMFS), species from freshwater organisms to sharks and whales are better protected.

So what does “threatened” mean? The ESA defines “threatened” as likely to become endangered (which means the danger of extinction) in the near future. All species, except for pest insects, may be protected under the ESA if their populations become critically low.

As humans, we have the ultimate power over sharks, and it’s a massive problem with the fishing industry. Commercial fishing and the harvesting of shark fins are the biggest reasons for putting oceanic whitetips on the “threatened” list with other sharks like the Great White, the Whale shark, the Scalloped Hammerhead, the Dusky shark, and the Basking shark.

Before we talk about the threat of commercial fishing, it’s worth taking a look at our attitudes about sharks and how it might play a role in supporting the decline of a species.

Our Love/Hate Relationships With Sharks

When people talk about sharks they either love them or hate them; they are intrigued, or they’re terrified. While Spielberg’s Jaws only deepened the fears of hundreds of thousands of Atlantic Coast vacationers (and probably even a few dozen folks in the Midwest), educational campaigns like “Shark Week” have helped people to see sharks in a more positive light.

Why do some of us dislike and fear sharks so much? Maybe it’s in our DNA, or perhaps it’s the years of sharks being portrayed as the “bad guys” in popular culture. While sharks aren’t nearly as evil as they are profiled to be, history proves that they can be a threat to the human population.

Some of the earliest, well-documented proof of humans getting retaliation against sharks was in the early 1900’s. In 1916, four people were killed by sharks during a two-week period along the Jersey Shore.

There were few witness accounts of what happened and like most events that strike fear and chaos into a community, there were plenty of rumors surrounding the shark attacks. Eager to find the “killer” shark and rest the fears of hundreds of vacationers and beachgoers, many people took part in killing any shark that they came across.

It’s unclear how many sharks were killed during that period and whether or not one shark was the sole killer in the string of incidences. The lone Great White was believed to be responsible for the deaths, but knowing the behaviors of an oceanic whitetip, it could have very well been a whitetip.

The incidences in New Jersey was the inspiration for the novel Jaws (which was later made into the iconic blockbuster), and it also set the tone for how many people felt and continue to think about sharks. While campy movies like Sharknado make light of shark invasions and attacks, there are some who still view sharks as the biggest threat to our oceans.

According to Oceana, the oceanic whitetip has experienced an 80 percent decline in its population. The main reason for the significant decrease is commercial fishing. While many oceanic whitetips are accidentally caught in a purse seine (a large net that looks and acts like a drawstring bag), many are fished and killed on purpose.

Those that fish whitetip sharks intentionally are catching and killing them for their fins, which is in high demand for shark fin soup. Since sharks are slow to grow and don’t reproduce prolifically, the solution of the population decline isn’t as easy as simply “restocking” the population.

How Does Their “Threatened” Status Affect Us?

Despite how you feel about sharks, the oceanic whitetip has an important role in our ecosystem. As we mentioned earlier, as an apex predator it feeds on other fish. If the sharks disappear, larger fish will become the top predator and will eat the herbivores. With a decline of herbivores, the algae will take over and affect the health of large bodies of water.

Without sharks, our ecosystem as a whole will shift, and we begin to experience the loss of some of our favorite kinds of seafood such as scallops and clams. It may not seem very impactful, but it can affect the livelihood of local seaside communities.

Although it’s illegal to harvest sharks for their fins in the U.S., millions of sharks end up in the international market each year, and some of the illicit sales may end up being part of the U.S. economy.

A better (and legal) way to boost our economy, while protecting a species of threatened sharks, is to get involved in ecotourism. Other parts of the world, where sharks are thriving (thanks to shark sanctuaries) have improved their economy by educating others on the life of sharks and how to appreciate them rather than to fear them as man-eating killers.