Blue-water diving, swimming, boating, and fishing are all wonderful opportunities for an up-close encounter with wild animals. The open ocean is an extremely variable ecosystem with millions of species of plants and animals, and like any ecosystem, it has an intricate food web connecting the life forms within it. One of the most famous types of ocean animals is the shark. Sharks are some of the most beloved, yet misunderstood animals, and what follows is a broad overview of shark facts: shark behavior, diet, physical characteristics, and other information to give you some idea of what to expect, should your next ocean adventure involve sharks.

Whether you're headed into shark-hunting grounds in search of the ultimate underwater photograph, or you're just not that familiar with sharks and want to know more before you encounter one in the wild, what follows is an educational resource to help you remember that sharks are just animals, ones that command our respect, attention, and care. Sharing shark facts is both a way to be safe around these creatures and a way to make sharks more familiar to us and give a more realistic perspective on them. 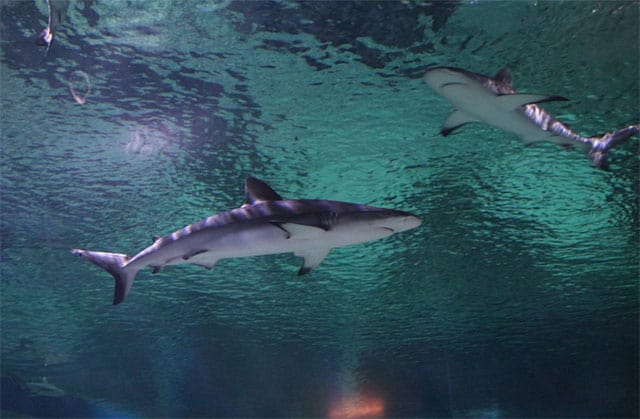 Sharks are ancient animals that have survived and thrived in Earth's oceans for more than 400 million years, putting their arrival in the ecosystem much earlier than that of the dinosaurs, who first appeared on Earth roughly 230 million years ago.

Many sharks are apex predators in their environment, meaning that sharks' hunting helps to control the population of their prey species. This helps limit the strain that prey animals put on their own food supplies, meaning a more balanced environment for all creatures.

Not all sharks are the apex predator of the food web in their ecosystem. Orcas and octopi may hunt down and eat sharks smaller than themselves, and in some countries, humans have also developed a taste for shark, often in the form of shark-fin soup.

While sharks can be vicious predators, humans are more likely to die from a bee sting or getting struck by lightning than from being attacked by a shark. Roughly thirty people worldwide are killed by sharks each year.

Most sharks live in the ocean, but the bull shark is famous for adapting to the coastal rivers of Florida. So long as its back is submerged, it can swim in as little as two feet of water.

Sharks live in every ocean on earth. 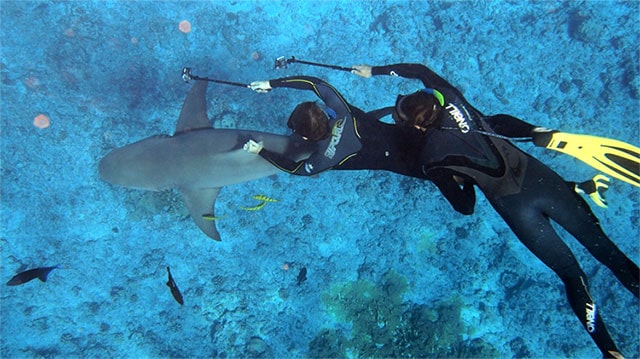 Sharks' skeletons are largely cartilage, not bone, making the bodies of sharks much bendier and more flexible than most animals, preventing injuries that would incapacitate you or me.

Sharks' closest "cousins" are rays and skates. These oddly-shaped creatures have cartilaginous bodies the way sharks have and may have diverged in evolution from early sharks hundreds of millions of years ago.

Sharks may have evolved from lampreys, and many sharks still have a detachable lower jaw, like lampreys, suggesting a common origin.

Sharks lack a bony ribcage, meaning that their body - highly flexible and agile in water - may be crushed or injured under its own weight if brought out of the water.

Sharks' eyes do not blink like ours, as they have a special "nictitating" membrane protecting them. The membrane is transparent and clear, allowing the shark to see through it easily while remaining well protected.

Many sharks have skin with a strange, dual texture - rubbed one way, shark skin feels smooth, but if rubbed "against the grain", shark skin is as rough as sand paper.

A shark's body can be up to six times more efficient than a submarine in its ratio of power to weight, leading to shark-inspired designs for boats, submarines, and swimwear.

Sharks were once hunted for their livers, which can be made into an oil that is rich in vitamin A. The liver is a shark's largest internal organ by weight, growing as large as 25% the size of the adult shark in some species.

Sharks can famously smell blood from far away. Some species can detect it so keenly that they can smell the equivalent of a single drop of blood in an Olympic swimming pool, or approximately 1 part blood per 1 million parts seawater.

The Portuguese dogfish shark only grows to about 1 meter long, but can swim to depths of more than 3,600 meters in search of prey. Its small, dense body is suited to the crushing pressures of the deep ocean.

Whale sharks are the largest of all living sharks, with bodies reaching up to 41 feet in length and 21 tons (42,000 lbs) in weight. Fortunately for swimmers and divers, whale sharks are gentle creatures that subsist on a diet of plankton, small squids, and fishes.

The largest shark ever discovered, Carcharodon megalodon, had teeth up to six inches long and a body up to 40 feet from nose to tail - the size of a T. rex.

Many sharks give birth to live young, while others lay leathery, pouch-like egg sacs where the fetal shark develops for several more months before hatching.

Whale sharks give birth to the largest litter of pups (baby sharks are called pups) of any known shark species, able to bear up to several hundred young at a time.

Shark Facts: The Life of a Shark 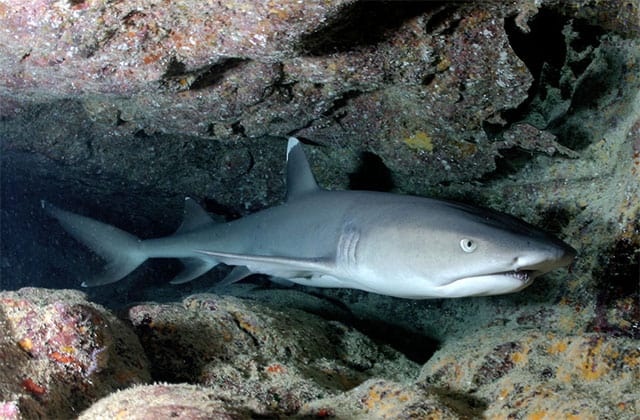 Sharks spend most of their lives on the move, searching for food and tracking prey scents, which they can detect from miles away.

Most large sharks are solitary hunters while smaller species like the Portuguese dogfish may hunt in packs.

Most fishes' bodies contain a "swim bladder" that regulates its internal air pressure to help the animal change the depth at which it swims. Most sharks, by contrast, lack a swim bladder, so they must constantly be on the move or they will sink, even when sleeping.

It is necessary for most sharks to keep swimming to breathe, as the act of swimming forces water through its gills, enabling oxygenated water to reach them.

Some sharks, like the wobbegong and the angel shark, can breathe while lying on the ocean floor for extended periods of time, making their respiration more like that of bony fish than most sharks.

Despite a lack of external ear parts, sharks can still hear well, picking up sounds much lower than human ears can detect.

Sharks have electroreceptors in their snouts, which may help them pick up details of their environment that their eyes and ears do not. These receptors are visible as specks or dots on the skin around the nose and mouth and are sensitive enough to detect the heartbeat of nearby animals and the electrical current in underwater electrical equipment.

Most sharks live an average of 20 years, with few exceptions. The spiny dogfish shark can live for more than 100 years, and the oldest living shark ever found, a Greenland shark, was estimated to be more than 270 years old.

Sharks have been called the "cats of the sea" for their curiosity, but they use their nose and teeth to check things out around them instead of their limbs. A shark may bite or chew things like old tires, street signs, and metal cans, and sharks have been found with such objects in their stomachs.

While sharks in general are widely believed to be dangerous, fewer than 20% of shark species actually grow larger than humans, and there are hundreds of species that are much smaller than us.

Why Are Shark Facts Important? 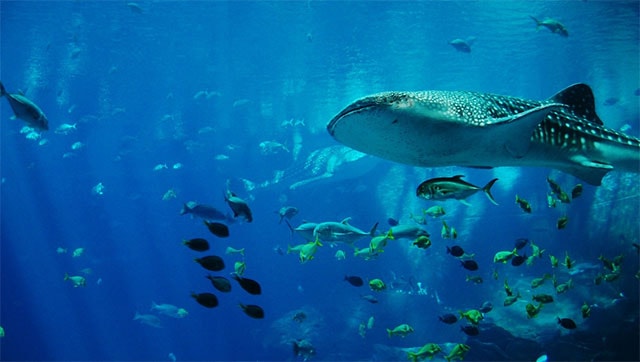 Sharks have been a part of the world's oceans for hundreds of millions of years. Their bodies have much to teach us, not only in technological imitation of their physiology, but they can offer clues to improving human medicine as well. Sharks show no signs of going away except when over-hunted, so it's up to humanity to figure out how to make room for these beautiful, mighty creatures. Movies like Jaws have only intensified people's fear of sharks, but educational and conservation efforts can have a real impact on the well-being of wildlife, so arming yourself with shark facts is a way to help make the world a little safer for sharks.

How Can Someone Find More Amazing Shark Facts?

If you are interested in learning more, you're in luck - people love learning about sharks! Libraries, bookstores, aquariums, and online sources like Wikipedia and National Geographic can provide you with deeper knowledge about any of the above subjects, and lots more. Your local community will likely have public resources available for learning more even if there isn't an ocean for hundreds of miles around.

Sharks are weird, fascinating creatures that rarely come into conflict with humans, despite their reputation. Their bodies are flexible, tough, and athletic with powerful senses making them excellent ocean predators. Humans usually encounter sharks in their habitat, not the other way around, and the rare encounters between people and sharks are usually dangerous for the shark, not us. Despite their fearsome appearance and commanding predatory abilities, sharks are no match for human beings and must be treated with care and respect. They have an important role in balancing the ecosystems of the world's oceans, and we have much more to learn from them than we have to fear.