How To Go Scuba Diving With Sharks and Be With Them

Going scuba diving with sharks is one of the most exciting things you’ll do in the ocean. You really can’t get up close to some of these creatures – see how big they are – and not feel their majesty and power. The truth is that most sharks aren’t particularly hostile towards humans, nor do they prefer to eat us over other animals. Here are the other things you should know about going scuba diving with sharks.

Sharks are predators – and like most predators, they’re attracted to anything that singles out a target. If you’re splashing and moving erratically, many sharks will think you’re injured, and that makes you prey. By swimming calmly and regularly, you’ll be able to blend in with the sea life around you.

It’s true that blood can set sharks off, but they don’t exclusively attack bleeding targets. They’re most likely to attack you if they mistake you for something else, which brings us to our next tip. On the other hand, if you remain calm, you have much better odds of encountering a friendly shark. (Friendly, in this case, meaning “not aggressive”.)

When you’re going shark swimming, it’s best to avoid any shiny objects – and yes, that includes your gear. Go for a flat or matte finish instead. The reasoning behind this is simple. Most fish have shiny scales, and the less you look like a fish, the better off you’re going to be.

To fulfill this requirement, you may need to purchase new gear or permanently recover your existing gear. Do not just wrap something dark around your gear. If something can come off, you should assume it will, and that may provoke an attack.

Ask another diver to look at you before you enter the water and make sure you’re not reflecting more light than necessary.

Yes, it’s fun to go along with fish and experience their lives for awhile, but the same is not true of predators. Remember, sharks do not understand you or your goals. If they see that you’re following them, they’re going to assume you’re hunting them and react accordingly.

In most cases, your goal is to avoid notice as much as possible. This means you don’t follow sharks, you don’t try to provoke aggressive behavior, and you definitely don’t try to feed them in hopes of filming a great moment with your camera.

Many sharks are apex predators. They are used to attacking targets that bother them, and unless you’re completely prepared, they can and will attack you.

One of the best ways of protecting yourself is remaining with a larger group of divers. Sharks are hunters, but like most hunters, they prefer to go after prey that’s isolated and alone. If you’re in the middle of a bigger group of divers, chances are a shark isn’t going to attack you without being provoked.

In this case, by “group”, we mean genuinely close physical proximity. Ideally, you’ll be no more than twice your arm’s length away from others. You don’t want to be ten, twenty, or thirty feet away from everyone else. That could be far enough for a predator to view you as isolated from the rest of your group.

#5: Watch Them At The Right Times

It’s usually safe to watch sharks in the late morning and early afternoon. If nothing else, this is when things tend to be the brightest, so you’ll be able to have the best view of what’s going on. There’s a more practical reason for this, though.

Most sharks actively look for food in the early morning and late afternoon, so they’ll be more aggressive at these times. Even if you haven’t provoked them, they may come after you if they’re hungry and want to see what you taste like. On the other hand, if they’re not hungry, they’re not likely to attack you just because they can. 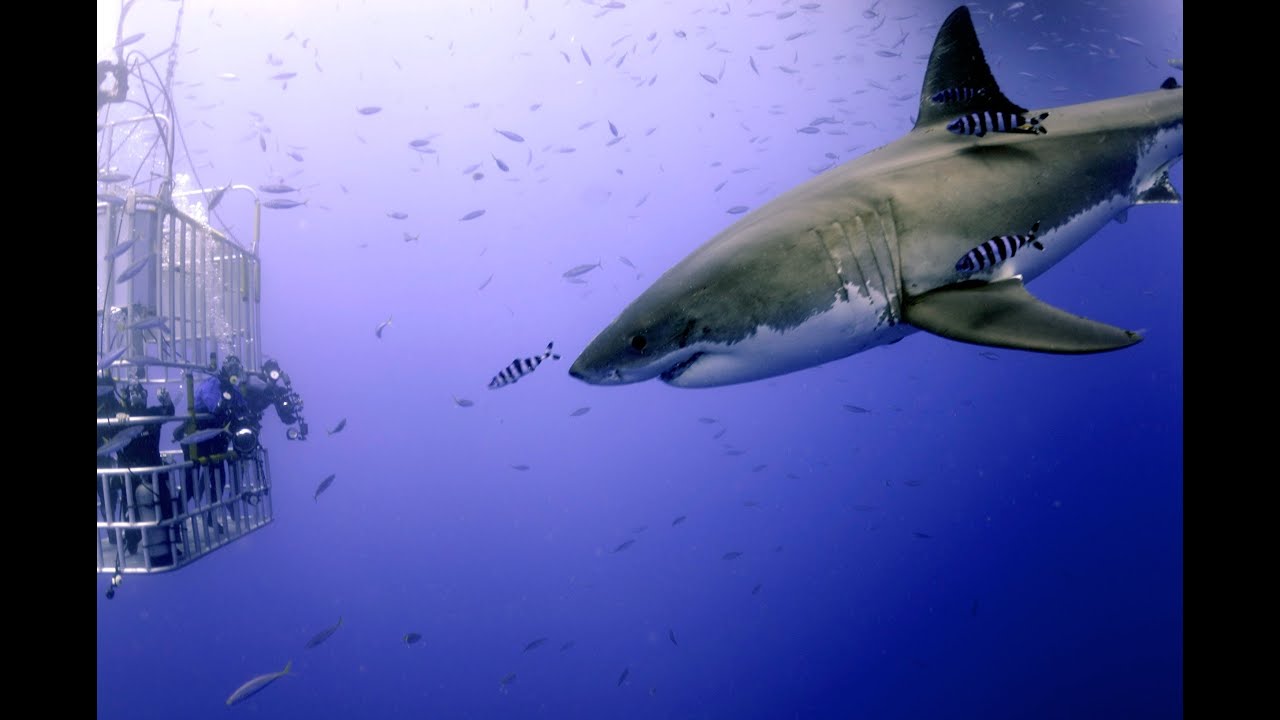 #6: Stay Away From Fishermen

Whether other people are fishing near the shore or out in a boat, it’s best to stay away from fishermen when you’re looking at sharks. The blood and frantic wriggling involved can attract sharks looking for food, and that’s exactly what you want to avoid. In general, you should try to be at least a quarter of a mile away from any fishing going on.

This ties into #2, but it deserves separate discussion. Sharks are surprisingly good at seeing contrasts in colors – and in the ocean, “bright” tends to mean “food”. By wearing dull colors like dark blue or black, you’re much less likely to attract their attention in the first place.

Unfortunately, this means you may have to skip out on fashionable wetsuits – but when you’re scuba diving with great white sharks, how fashionable you look is going to be the last thing on your mind. 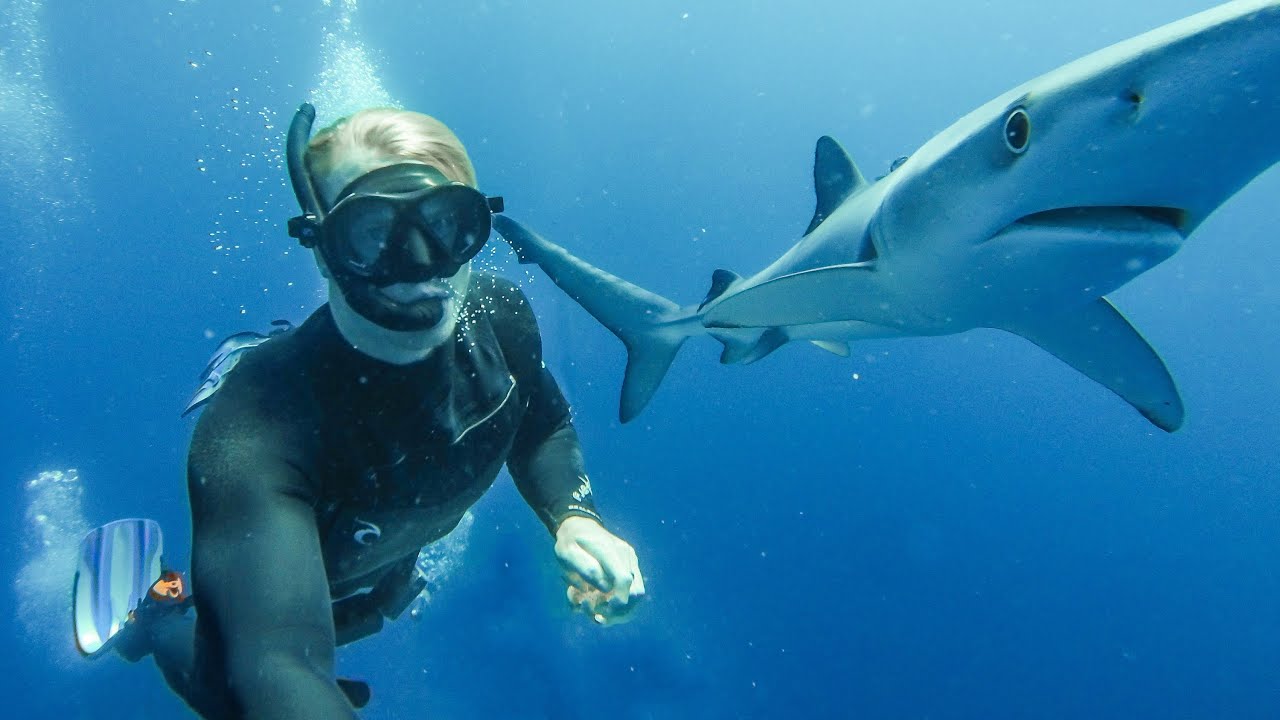 #8: Don’t Go In The Water If You’re Bleeding

Everyone should know this already, but we’re restarting it just in case. Don’t go scuba diving with sharks if you’re bleeding. It doesn’t matter how small the injury is. It doesn’t matter if this was going to be the highlight of your vacation and you planned everything around it, only to scrape your foot on a rock five minutes before starting. We can’t repeat this enough: Don’t swim with sharks when you’re bleeding.

No responsible guide or instructor will let you. If the dive hasn’t started, chances are you can get a refund on your money. Seeing reef sharks and other predators in the ocean is fun, but it’s not worth the risk of setting them off.

Remember, sharks are absurdly good at smelling blood. As explained by the American Museum of Natural History, some sharks are accurate enough to detect a single drop of blood in the water the size of an Olympic swimming pool. There is a limit to their senses, but for all practical purposes, they can smell you if you’re bleeding.

If you know how to swim with sharks, you can do it practically anywhere they live – but until then, it’s better to stick with known diving areas that have tour guides on hand. These guides can show you to popular spots like feeding grounds where sharks can be safely observed from up close.

If you’re really dedicated, you can climb inside a shark cage instead, but that’s only for the bravest people.

The good news is that shark spots are present throughout the world, and many of the areas offer all-day tours for scuba diving with sharks. You won’t be underwater the whole time – that would be incredibly tiring, and that’s not even counting the risk of getting too cold – but a full-day trip will have multiple excursions to enjoy.

One other thing about tourist spots: Many of them can’t guarantee which sites you’ll visit ahead of time. Changing conditions in the water mean that the best places vary from day to day, so expect a little chaos in the planning.

If you’re willing to head anywhere, check out a list of great diving spots. Otherwise, see what’s available in your local area (and what parts of the year are best for looking at sharks).

#10: Defenses Yourself If Necessary

If the worst happens and a shark comes to attack you, you’ll need to protect yourself. Fortunately, there are a few things that can help deter them.

First, when trying to move away, do so at a steady pace with a minimal amount of splashing. It helps if you have fins or other tools that will allow you to push forward without breaking the surface too often. Remember, splashing = injured, and injured = food. You don’t want to play dead around something that wants to eat you.

Next, if it gets too close, strike it in the gills, eyes, or snout. These are more sensitive than the rest of its body. Try to do this with body parts that are adequately padded. If you scrape your knuckles when punching a shark, you may end up attracting more of them to the area. (Have we mentioned that bleeding around sharks is bad? Because it’s bad.)

In the meantime, be sure to keep your eyes on the shark. Sharks have a variety of hunting patterns. Some will circle you, others will charge straight at you. Either way, you’ll want to see them coming. Whenever possible, keep them in your line of sight so you can be ready to react on a moment’s notice.

Finally, know which species are likely to attack you. Bull sharks, tiger sharks, and great whites are the most dangerous. That baby tiger shark may be cute, but it’s still a predator. Many other types of sharks aren’t interested, and you may mistake their curiosity for an attack. Either way, it’s better to pull back and be safe.