In the Gulf of Adaba, north of the Red Sea and located between Dahab, Egypt, and Saudi Arabia, there’s a sinkhole almost 400 feet deep. Known as the Blue Hole, it’s one of the most beautiful diving places in the world… and one of the most dangerous. It’s not entirely clear how many have perished in its depths, but estimates put the number at over 200 across the years.

As a direct result of this, local laws now prohibit unqualified divers from heading down into the depths of the Blue Hole. No matter how much you want to see it, safety comes first. Fortunately, it’s not that hard to meet the qualifications. If you’ve done serious diving anywhere else in the world, chances are you already meet the standards for diving here.

What Makes The Blue Hole So Dangerous?

Opinions are split. Some experts think the Blue Hole doesn’t deserve the reputation it has and that many fatalities are the result of people growing overconfident. There’s some sense to this. It doesn’t matter if you’ve made 200 successful dives in the past – if you make a big mistake when you’re a few hundred feet down, all the experience in the world isn’t going to save you.

Others think the sinkhole’s shape is a significant factor in the number of deaths attributed to the Blue Hole. About 300 feet down, there’s a massive tunnel, and divers have consistently reported seeing the light coming from it. Some, believing it was the surface, swam down instead of up.

This can lead to a condition known as Nitrogen Narcosis, a severe threat for divers. It’s even claimed the lives of professionals like Yuri Lipski, who may be the most famous death in the Blue Hole because it was all caught on film.

What Is Nitrogen Narcosis?

As explained by the Encyclopedia Britannica, nitrogen narcosis is an effect created when nitrogen is breathed under increased amounts of pressure. Under normal circumstances, nitrogen passes through the body without meaningfully affecting it. That’s a good thing, too, since it’s about 78% of every breath you take!

The problem is that nitrogen doesn’t get absorbed by the body in the same way oxygen does. To breathe underwater, the air needs to be at the same pressure as the water. When you’re 100 feet underwater, air needs to be four times as dense. The deeper you go, the worse the effects tend to be.

Symptoms of this condition include numbness, carefreeness, lightheadedness, and euphoria. Critical thinking slows and is often followed by irrational behavior. From there, it tends to be affected by the water a diver is in. People who are in warm water often report feeling comfortable and relaxed, while people who are in colder, darker water often report fear and anxiety.

Regardless of the temperature and amount of light, it’s often considered similar to being drunk.

To counter the effects of nitrogen narcosis, many divers prefer to use helium for deep dives. Helium (another inert gas) isn’t absorbed as quickly, so it’s a good substitute. Unfortunately, many people diving into the Blue Hole don’t consider the value of changing the gas in their tanks before they head down.

Can Oxygen Be A Threat?

Yes. The beautiful tunnel in the Blue Hole is about 300 feet down, but oxygen starts to become toxic at 184 feet unless a special mixture is used. Just like nitrogen, oxygen behaves differently under extreme pressure, and that can quickly cause damage to the body.

The most common problem arising from oxygen while diving is known as hyperoxia. This form of oxygen toxicity tends to result in breathing problems, myopia, and disorientation. Actually developing hyperoxia is rare thanks to developments in diving technology, but going too deep can still trigger problems.

This is especially true with mixes for deep dives, which can go as high as 100% pure oxygen. In most areas, you’ll need to show proof of qualification and training before you’re allowed to buy high-oxygen tanks or mixes.

For added help while diving, you may want to spend time breathing oxygen-rich mixtures above the waves to get a better sense of how it affects your body. Going to oxygen bars may help you get used to the feeling (although the high pressure when diving means the air you breathe in places like the Blue Hole will be different).

More importantly, however, practicing your equalization and can help you learn to slow down. When you’re fascinated by an underwater monument, it’s easy to descend quicker than you should. By turning your descent into a more deliberate experience, you’ll be able to minimize your risks.

In short, given the dangers that exist at these depths, diving into the Blue Hole is only safe when you’ve made the correct preparations. That includes adjusting to the pressures and using the right gas mix to let you stay down and enjoy the area.

How Experienced Should I Be To Dive Into The Blue Hole? 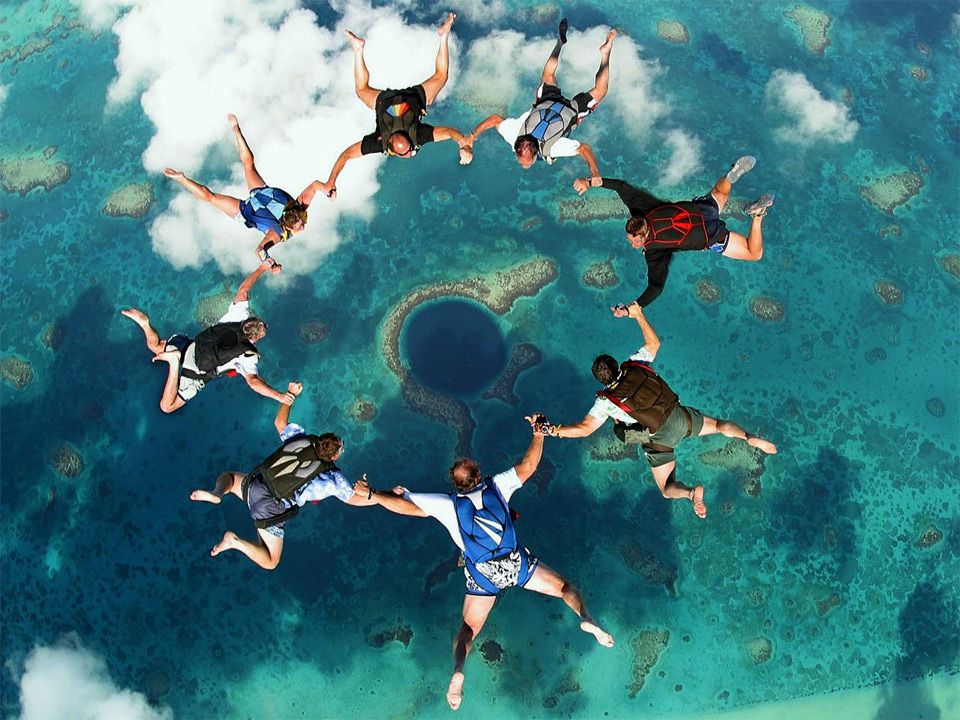 At this point, you may be asking “What should divers do for their own safety?” It’s true that whatever the cause of the (many) deaths in the Blue Hole is, you’re asking for trouble if you go there without adequate experience. We recommend the following plan.

First, get used to making deep dives on a regular basis. On each trip, you should go 25 feet further down each time until you regularly dive to 300 feet or more. This should only be done under the supervision of another experienced deep diver. With this, you’ll have a better understanding of the effects of depth and pressure on your body and how long you can safely remain underwater.

Taking things step by step will also help you determine if you’re at risk for any other problems. For example, some people experience the symptoms of Nitrogen Narcosis at as little as 30 feet, while others can go up to 180 feet before they begin experiencing significant effects.

This is more biology than training, and while you can cope with the effects, you cannot develop a tolerance to Nitrogen Narcosis. Our bodies – unfortunately – don’t work that way. If you dive 100 feet on a normal diving mix, you’re almost guaranteed to suffer this condition. The worst part is that you may not even notice it because the first symptom tends to be an assumption that everything is fine.

Once you’re used to deep dives, it’s time to train for complexity. Some underwater formations – especially anything light comes through – look like the surface when you’re underwater. Fortunately, you can train to orient yourself underwater and get a better sense of which way is up.

Make a few dives through complex formations and learn to keep track of which way leads to the surface. For help, you may want to purchase and begin using a Delayed Safety Marker Buoy. Often referred to as a ‘safety sausage,’ this buoy can be used underwater to show the way to the surface. It can even help bring you there (intentionally or unintentionally), making it invaluable for deep dives.

Finally, you should only travel to the Blue Hole as part of a larger group. Chances are you’re not all going to black out at the same time, so Blue Hole diving in a larger group gives you several extra hands in case things go wrong. The more people you have, the safer the great Blue Hole is likely to be.

Wait, Isn’t There Another Blue Hole?

Yes. If you’ve felt confused throughout this article, you may be thinking of a different great blue hole. The other place with this moniker is the Belize Blue Hole, located 50 miles offshore from Belize City along the Lighthouse Reef.

Where is Belize, you ask? The nation is located on the Atlantic side of Central America, right next to southeast Mexico and northeast Guatemala.

The blue hole Belize owns is about a thousand feet across and goes almost 450 feet down, making it the largest blue hole known. It’s especially popular for the wide variety of geographic monuments visible within. Known more formally as the Blue Hole Natural Monument, the area is jointly managed by Belize’s government and the Belize Audubon Society, both of whom have a vested interest in maintaining the area.

In many ways, blue hole Belize diving is better for a casual visit than the deadlier hole by Egypt. Aside from linking up with the larger Belize Barrier Reef, the number of visitors ensures a steady supply of eyes and helping hands if they’re needed. Many tour guides work in the area, and with so many interesting sights near the surface, you won’t have to do a deep dive to enjoy yourself.

Entry is free for residents of Belize but costs BZD$60 (about USD$30) for outsiders as of the time this guide was written.

For more information on this area and Blue Hole diving, visit the Belize Audobon Society’s official page for the Blue Hole National Monument.